As Flynne’s battle to save her family and timeline surges forward, the stakes hit an all-time high.

When the Season 1 finale of The Peripheral picks up, Tommy is in some serious distress. Much to his dismay, when the EMTs arrive on the scene, they find a pulse on ol’ Corbell Pickett. But before they can get too into the weeds, the police are called over to Clanton Urgent Med. There, he finds the distressed Dee Dee, who assumes that her shooter was the one who killed the sheriff and attacked Pickett. Tommy nods and assures her because what the hell else is he going to do?!

Lowbeer proposes an alliance to Burton and Flynne. She tells them she can help “navigate the coming storm” that’s about to strike their world. Flynne demands that Lowbeer heal her mother, but the inspector says they’ve tried everything possible. Their mom only has 23 days to live.

Ash sets up a meeting with Cherise. Ash says she knows where the data Aelita stole is; it’s in Flynne’s brain. Not only that, but Ash says Nuland can’t trust Lowbeer. In exchange for this info, she wants Nuland to kill Zubov, which Nuland seems open to. Cherise will also push the Jackpot to the next level, with hopes of eliminating Flynne, her family and everything else in that world in the process. 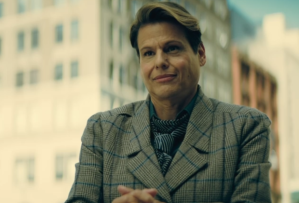 Wilf apologizes for using Flynne, and says he thinks his sister is dead. They link up again, so Flynne can get some real answers. She suggests they head to his secret place, but Ash is watching them. They find Aelita’s younger-self, only she knows Ash is lurking. She wants Wilf to follow her, but Flynne’s gotta go. Aelita’s adult self appears, and tells him the Klept killed their families. There was contagion in the camps, and they wiped everyone out in fear. Five-million people in under a fortnight, she says. And so, the Klept suppresses their memories because they fear the retaliation. A group of people appears that Aelita calls her army. She wants to tap into the R.I.’s many secrets… secrets that all lie in Flynne’s head.

Corbell’s cronies say he has a 10 percent chance of surviving. (Since he’s not dead yet, he’s probably going to live, right?) Atticus seizes the opportunity to try and take control, but Jasper isn’t buying it. With his buddies passed out drunk in the car, he parks his vehicle on the train tracks. He calls his wife and has a change of heart, but when a train approaches, he can’t wake Atticus up fast enough to save them. He leaps out of the way just as the train demolishes the car and flames light up the night sky.

Tommy tells Flynne he heard about a potential right-wing militia threat. They’re planning on blowing up a missile silo. He asks if she knows anything about it. She lies. She goes back into the Sim and tells Ash that she knows Cherise is behind the threat. Ash explains that the data Flynne and Aelita stole from the R.I. is stored in DNA, and Lev knows about it too. Ash admits she told Cherise about it, and Flynne is not happy. “It’s just a game to you, isn’t it?” Flynne asks while storming off. But she declares: “I’m going to win.” 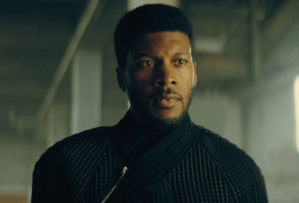 Flynne and Conner reunite in the real (and decimated) London. Flynne pitches a wild plan: She wants to open up a new stub. A reboot. But she needs his and Lowbeer’s help. She asks Lowbeer if she has the power to start a new stub, and while it’s not politically wise for her to do, she knows how it can be done. Flynne says Cherise will think she won and that Lowbeer helped her do it. They’ll also have all the data Aelita stole, and it’ll save Flynne’s world from the Jackpot. As for Burton, she wants him left out of it. Then, she asks Lowbeer to send her to one of the R.I.’s stub portals.

She takes down a guard and gets access inside. Picks up a stopwatch reveals a bunch of Peripherals guarding the joint. A fight ensues and she kicks all of the ass. She places the watch back down and sees a digital tree of different stubs, all with different years attached. Cherise speaks through a Peripheral, and says she’ll find Flynne no matter what. “I think I want to be the hunter now,” Flynne tells her. “I know exactly where you are. And you have no idea where I’m gonna be. Not without the coordinates.” She smashes the watch and the tree goes dark. And Cherise is shook.

Flynne wakes up, and we see more from her conversation with Conner. If Cherise thinks Flynne is gone, then she’ll have no reason to blow up the silo. Flynne asks Conner for help, saying it needs to look like Lowbeer sent somebody, as a favor to Cherise. She says she’s made peace with it. “I’ll just take a walk… and count back from 10 in my head.”

We cut to Flynne walking by a creek. Conner is up on a hill, locked, loaded and ready to fire. Flynn counts down and sees flashes of all her loved ones in her memory. A gunshot fires in the distance. When she comes to, she’s sitting across from Lowbeer who asks: “So… should we get to work?”

How’d you like the ending and are you hoping for a Season 2? Grade the finale and season overall, then drop your thoughts in a comment!