No, Oprah Winfrey hasn’t usurped hosting duties from our man Jeff Probst, but Wednesday’s immunity-palooza on Survivor made it seem like she might’ve been puppet-mastering from behind the scenes.

This week saw the return of another tried-and-true challenge from the show’s history: Last Gasp. You know, the one where the players are in the water under a grate, and as the tide rises, they have less and less room to breathe? It’s a Survivor staple. Only this time, two players outlasted even the South Pacific ocean as they remained in the competition until the water began to recede! In a totally unprecedented move, Probst announced that Owen and Karla conquered the earth’s gravitational pull, the moon, the sea and nature in general, so he donned them both with the illustrious and highly coveted necklace. Now that’s a twist!

But it didn’t stop there. As a result of a “hidden” advantage placed right under everybody’s noses (seriously, the amount of times the castaways were standing. right. there!), Cody received a brand-new and quite incredible power. It was the Choose Your Champion advantage, which gave him the chance to place a bet on the one player he thought would win, thereby giving him two chances at immunity. He could win it himself, or if he guessed the right person, he’d win alongside them. He was also given insight as to what the challenge would be, so it all came down to how well he knew his fellow castaways. He picked Owen, and he picked right. 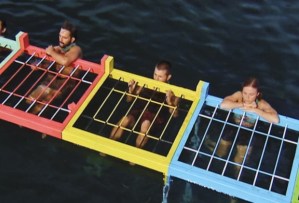 Another kicker: No one would know the result of his advantage until after the votes were cast, which is a pretty wowing power! The rest of the tribe could only operate based on the assumption that Cody could be safe. Therefore, either way you slice it, it would be far too risky of a move to target him this week given the 1-in-6 chance he was safe. Cool advantage, clever execution. Kudos, Survivor.

Thus, heading into the night’s Tribal Council, three of seven players were immune, which reeeally sucked for Cassidy, Gabler, Sami and Jesse. Before the challenge, however, Sami put in some work trying to turn Karla and Cass against each other, which hey, was smart for his game. (Choosing violence when your cards are down is absolutely fair game.) Karla seemed to buy everything he was selling hook, line and sinker, telling us she regretted clueing Cass in on her idol and giving her No. 1 the power to bulldoze her game. Voting Cassidy out could be the perfect reset she needed to further her game. 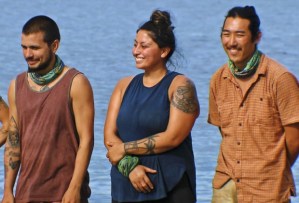 But it was all an editing ruse. Ultimately, Sami was voted out of the game unanimously since no one could trust his constant flip-flopping and middle-playing. He did use his Hail Mary option — the Shot in the Dark — but when Jeff unraveled the teeny, tiny scroll it read: NOT SAFE.

Also noteworthy this episode: Jesse. This guy is constantly impressive. Not only did he see that Karla was attempting to bond with Sami, but he also saw opportunity in using Sami’s vote-out to tear Karla and Cassidy apart. If everyone voted Sami, but they convinced Karla that Cass was the plan, then Sami would go and Karla’s vote would’ve potentially been the only one for Cass. The two women would’ve likely been gunning for each other next time. It didn’t go down exactly like that, but still, Jesse’s strategic game (as we saw last week) is next level.

But will any of the other five remaining players recognize that before it’s too late?

Now it’s your turn! Did the tribe make the right decision? Were you hoping for a Cass/Karla showdown? Drop your thoughts in a comment below.