DC’s Stargirl dropped quite a bomb on the way to its series finale airing next week.

The title of the series’ penultimate hour, “The Last Will and Testament of Sylvester Pemberton,” seemed plenty ominous, and sure had fans fretting over Starman’s fate as he set out to single-handedly square off against the resurrected Icicle.

Little did we know, Sylvester himself never did quite come back from the dead. Yes, his attachment to the cosmic staff did preserve his corporeal form, but the brain inside of him belongs to the mad scientist known as Ultra-Humanite (who had previously called actress Dolores Winters and then a mighty albino gorilla home).

Viewers were blindsided with this bone-chilling realization as Cindy, Mike and Jakeem used Thunderbolt to be transported to one of Dragon King’s hidden labs. There, the nascent Young All-Stars team discovered Dragon King’s body with its skull cut open — after which, the aforementioned albino gorilla came from around a corner to confront them and reveal himself to actually be Cindy’s dad. 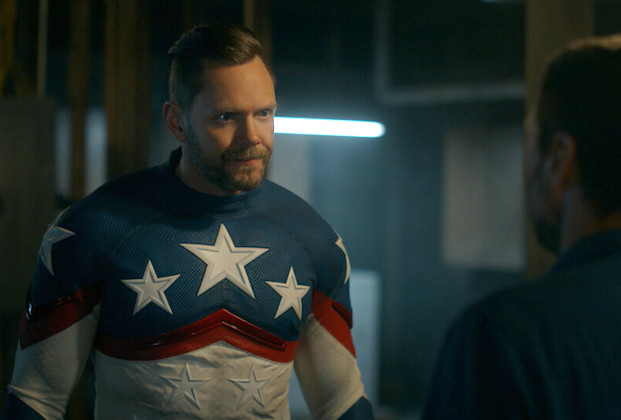 Sylvester, meanwhile, made clear to everyone his alleged intention to find and kill Jordan Mahkent, and did his best to disparage Pat/keep Stripesy from joining the fray. An eavesdropping Courtney in turn called out Sylvester, saying that she now sees she was wrong to idolize her once-presumed dad, assert that “sidekick” Pat is very much a hero — as well as a damn good father to her.

Later, Sylvester, upon running into a persistent Pat at the Mahkent home, seemed to let his former sidekick in on the mission, only to later KO him with the business end of the cosmic staff. Sylvester then dragged Pat off and dug a grave for him, revealing along the way that he in fact was now the vessel for Ultra-Humanite’s brain.

As Ultra-Humanite proudly recounted his journey to posing as Sylvester/Starman, flashbacks to his Season 1 finale and Season 2 appearances underscored how he had chatted up people from Pat’s life to study up for this “role,” and how he took steps to “power down” the other JSA members (by nudging Rick to OD on the hour-glass, make Beth box out her folks, etc;).

Heading into next week’s finale, the episode’s final moments showed Pat nearly getting through to the essence of Sylvester seemingly still inside the OG JSA member’s body. But Ultra-Humanite rebuffed the attempt, and continued to bury Pat alive….

So there you have your setup for the series finale. Ultra-Humanite (in Starman’s body) is allied with Icicle and Dragon King (as albino gorilla). Pat is buried. Rick is in a bad way. STRIPE is damaged. And Courtney doesn’t even have the cosmic staff.

What did you think of Season 3, Episode 12? As much as the Ultra-Humanite reveals tracks with Sylvester’s occasionally odd behavior, did it nonetheless make you flip your own lid? And feel extra-bad for those he duped along the way?

And is Pat not necessarily down for the count? After all, what was the plan he started forming at the Pit Stop with Zeek…?