With the season winding down, it was time for EPIC’s big summer showcase in The Mighty Ducks: Game Changers‘ Season 2 finale.

The titular squad (featuring members of both the Ducks and Team Dominate) were to face off against Team Canada, which was led by Coach T.

Things have not been great for Coach T after his team lost that unsanctioned game in Season 1 for the Ducks’ name. His violent reaction got him banned from youth hockey in Minnesota, and he was forced to relocate to Canada, which he hates because the bacon is too thick and he has to use a fork and knife to cut it. A win would be his sweet revenge for everything that’s happened. 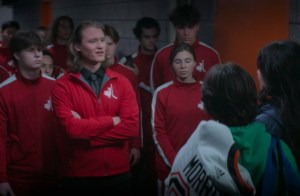 Evan facing off against his old coach was deflating because it was a reminder that he wasn’t good enough. In more bad news, Nick sprained his ankle and would not be able to play, but the team was not fussed about that at all.

Things were looking up for our young heroes in the first period. Jace overcame his season-long struggle to perform under pressure and scored two goals to put the team in the lead. He caught the attention of a scout for USA Hockey (aka the national team), who asked about his jitters after witnessing Jace’s breakdown last year. It all went downhill from there.

Jace missed several big shots, and Team Canada took the lead. To add insult to injury, the latter used the Ducks’ signature Flying V move to score. During a break, Jace claimed his “glitch” was back, but Sofi called him out for faking it.

Jace revealed his fear of success, that he was afraid to advance in the sport because that would also mean losing his friends in the process. But his teammates assured him that they’d stick by him no matter what, and the Ducks were soon back on the ice with renewed energy.

The Ducks tied the game, and Coach T came up with a vicious new play: Take out Jace at all costs. Team Canada was penalized for their foul move, and the Ducks received a penalty shot that could win the game. Jace nominated Evan, who didn’t think he could do it. But after Coach Cole encouraged the teen to “get out there” and “go win it,” Evan took his shot. He not only landed the winning goal but also got in touch with a scout from a university in Wisconsin.

As the teams loaded up their respective busses (and RVs) to head home, Alex handed Coach Cole a friendship bracelet she made, and he gave her a kiss. It’s safe to say they’ll stay in touch.

As for the shirt Maya made everyone sign, it turned out to be a banner that now hung in the arena.

What did you think of the Mighty Ducks: Game Changers Season 2 finale? Grade the episode below, and then sound off in the comments.