So close and yet so far. Just shy of Season 22’s Semi-Finals, two contestants were eliminated from The Voice Tuesday.

Based on the poll that followed TVLine’s recap Monday, the unlucky duo was going to be Team Gwen Stefani’s Kique and Team Blake Shelton’s Rowan Grace. Me — whether or not I have an ear infection — I’d have advanced Kique over Team Blake’s Brayden Lape; despite his way-better-than-average-for-him showing Monday, the teenage dream lacks the experience and/or instincts at this point to be a really compelling performer. (Great hair will only take ya so far.) 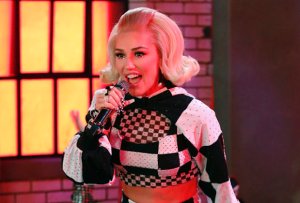 Before we found out which singers had been voted into the Top 8, we were treated to Team John Legend’s spirited rendition of The Band’s “The Weight” (on which Kim Cruse’s spectacularly massive voice stood out) and Gwen and Justin Aaron’s duet on Talking Heads’ “Burning Down the House,” which wasn’t nearly the train wreck that I expected it to be. Odd? Yes. But disastrous? No. (Kique, you’ll recall from Monday, had to sit out as he’d tested positive for COVID).

Rowan Grace (Team Blake), “Landslide” — Grade: C | Maybe it’s the ear infection that some readers are sure I have, but I didn’t hear Rowan hitting a bullseye on a whole lotta notes, especially in the early part of her Fleetwood Mac cover. Nice kid, pleasant voice overall and loads of potential; she’s just a dish that’s not quite fully cooked yet.

Kique (Team Gwen), “River” — Grade: B+ | In another pre-taped performance while he was in quarantine, Kique was nicely modulated, but I wanted more fireworks — and suspected he’d need them if he wanted to have any hope of beating Kim Cruse. This was good, though, strong and emotional — and with COVID! I wouldn’t be mad if he advanced, but my heart was with… 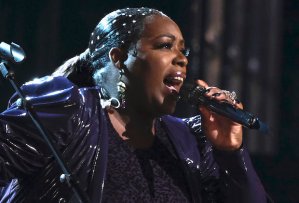 Kim Cruse (Team Legend), “Believe” — Grade: A | Let’s call it like it is, shall we? Kim is in another league from Rowan and Kique. And though she should not have needed to prove it again, she did so with a wonderfully well-calibrated performance that slowly built from a whisper to a roar. I know you’ll say it’s a popularity contest, not a singing contest, but if she doesn’t reach the Semi-Finals… ugh.

So, are you satisfied with the Top 8 that we wound up with? Would you have sent other singers home instead? Vote in the poll below, then comment away.