Chicago Med vet Colin Donnell is back in the Windy City in Peacock’s darkly comedic new series Irreverent (premiering this Wednesday), but it’s not long before a troubling turn takes him to a strange town down under.

Donnell stars as Paulo, a criminal mediator who finds himself in a dangerous situation that requires fleeing Chicago. On his flight, Paulo meets Reverend Mackenzie Boyd (The Boys‘ P.J. Byrne), who’s going through his own crisis. Following a series of unusual events, Paulo is forced to pretend to be Reverend Mack and go to the small Australian reef community of Clump, which is awaiting the arrival of their new reverend.

“I think the easiest way to describe Paulo/Mack is that he’s anything that he needs to be in front of whoever he happens to be in front of,” Donnell previews in the above video interview. “So he’s like this chameleon, adapting to whatever scenario he finds himself in, and he’s got so much charisma and street smarts, and the ability to shift really serves him well, especially considering all the drama that he finds himself a part of.”

Paulo really has to adapt to his circumstances when he lands in Clump with no choice but to oversee his eccentric new flock.

“Not only is he in a new place that he’s never been to on the complete other side of the world from where he started, [but] he’s impersonating a person and a job that he knows next to nothing about,” Donnell shares. “And he’s surrounded by probably the world’s most colorful cast of characters that he could possibly be dropped into. He’s just trying to do his best to survive, really.” 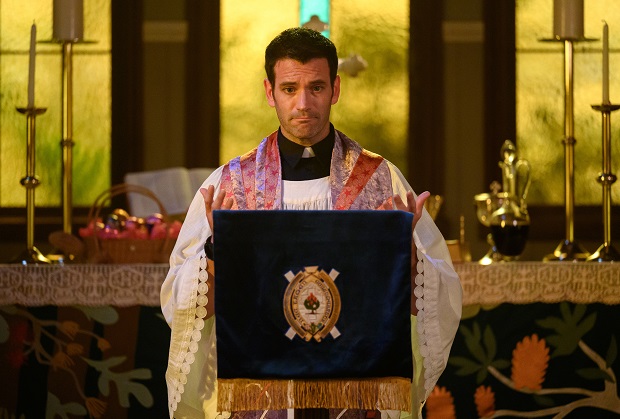 The quirky townsfolk of Clump are equally puzzled by their non-traditional (and handsome) new reverend, who is “not anything like what they were hoping would show up on their doorstep,” Donnell says. “It ends up being exactly what needs in the moment, because he really needs to disappear and be off the radar from the people who are chasing him. But it’s just confusion on both sides. He doesn’t know what to make of them, and they certainly don’t know what to make of this guy who is supposed to be a pious reverend in their church.”

Plus, there are the challenges of his new remote location, which doesn’t allow for easy access to cell and Internet service — traumatic flashback warning: there is a dial-up modem — but does give Donnell plenty of chances to show off his more comedic side after playing dramatic roles on Chicago Med, Arrow and The Affair.

“They really let me run with it. The scripts were really, really funny, and that was one of the things that I loved most about it when I when I read it,” Donnell shares, adding that the writers “wanted to push the envelope with how funny it was and sort of embrace the absurdity of the situation. I think that’s one of the things that I’m most excited about for audiences to watch is me getting to do something, really, that I haven’t had the opportunity to do before on television.”

Press PLAY above to watch more of our chat with Donnell about what to expect from Irreverent, then hit the comments with your thoughts on the series!