In Andor‘s Season 1 finale, the tension in the air was thick as the people of Ferrix gathered for Maarva’s funeral, while others lay in wait hoping to catch (or kill) Cassian….

Arriving in Ferrix for a possible appearance by the late Maarva’s son were ISB supervisor Dedra, who promptly went undercover with Corv to patrol the streets herself… Syril, with Sergeant Mosk… Vel, who found Cinta a little too focused on the manhunt… Luthen, clad in a cloak… and Cassian himself.

Cassian reunited with Brasso soon after slipping into town, and learned of Bix’s status. He then worked with Brasso and junkyard owner Pegla to get him to a crawlspace in a high tower to scout out the hotel where Bix is being held. Alas, a nosy Nurchi got wind of what the gents were up to and snitched to Dedra and Corv on Andor’s whereabouts — though by the time they breached the crawlspace, it was empty. Cass was already in a tunnel on his way to the hotel.

Meanwhile, the funeral parade got underway — a bit earlier than expected, and to a larger scale, prompting the Imperial forces to scramble in full and form a perimeter outside, leaving the hotel rather unguarded. Cass then emerged from the tunnel in the kitchen, and was pointed to Bix’s location by an old friend. 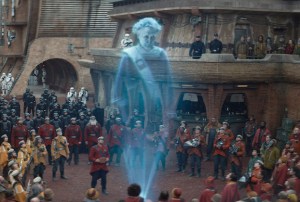 As the funeral procession came to a stop, B2Emo projected a tall hologram of Maarva, who had dressed in her Daughters of Ferrix gown to pre-record a pep talk for the people of Ferrix.  Maarva spoke of how if she had one regret, it would have been to “wake up” to the Empire’s tightening grip, its spreading of “a darkness like rust,” sooner. She left everyone with a final rallying cry — “Fight the Empire!” — at which point the crowd pressed on toward the front line of Imperial soldiers, and a melee ensued. Amping things up and then some, Paak’s son Wilmon took from his satchel a pipe bomb we saw him tinkering with earlier, and lobbed it into the Imperial’s front line.  And not only did it explode, but it took several cases of ammo with it! 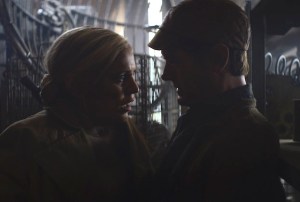 Amid the chaos, Cassian slipped through the streets with a dazed Bix… Pegla rescued a tipped-over Bee… Cinta stabbed Corv when he confronted her about tailing him… and Dedra was quite surprised to find herself saved from a trampling by Syril.

Cassian brought Bix to a salvaged ship at Pegla’s yard, where Brasso, Bee, Wilmon and Jeez were waiting. Cassian promised Bee and the others, “I will find you,” before sending them on their way.

Luthen rode his speeder back to the Fondor and told his flight droid to fire things up, after which he slowly turned around to find Cassian standing behind him.

“You came to kill me,” Cass theorized. “You don’t make it easy,” Luthen noted. 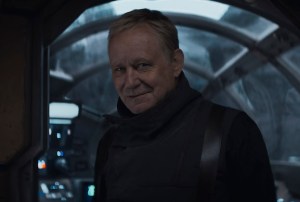 “I will now,” Cassian said, surrendering himself. “Kill me… or take me in,” he added. And after barely a beat, Luthen smiled, clearly happy to have Andor truly join the cause.

Elsewhere in the finale, Mon Mothma took advantage of her eavesdropping ISB spy chauffeur to plant the idea that Perrin’s gambling habit is the root of any accounting irregularities. Later, we saw her and Perrin present daughter Leida to Davo Sculdun’s son.

Lastly, in a mid-credits scene, we learned what the six-armed whatchamacallits that the Narkina 5 prisoners were assembling are: joiners for panels for the firing nozzle of the in-progress Death Star!