Tulsa King‘s second episode continues Mafia capo Dwight Manfredi’s quest to establish a criminal organization in the titular city. While back in New York, Dwight’s old Mafia pals have a major bone to pick with him….

After a quick establishing shot of the Mayo Hotel, the episode “Center of the Universe” gets right to it: Dwight is using the Internet to try to check up on his estranged daughter, Christina. He finds her records, but a pesky paywall keeps him from the information. (He can access it easily, but the paywall requires using a credit card, which Dwight refuses to do). This self-imposed inconvenience impacts nearly every area of his life; he can’t even use cash to send packages to New York anymore. What gives?!

Meanwhile, Stacy has one of her law enforcement buddies look into Dwight’s criminal history. (She admits that he bought her drink but won’t reveal that the evening progressed beyond that.) Later in the episode, we see her in therapy, partly to talk about her recent separation and partly to confide in an unbiased party. Cut back to Dwight, whose confusion at the automated pedestrian crossing warning is almost as hilarious as his introduction to the Center of the Universe — a popular Tulsa tourist attraction doubling as an acoustic marvel. The spot itself is unremarkable, but standing in the center blocks any noise you make from reaching anyone around you.

Amused but curious, Dwight walks to the Center of the Universe and looks around. He quickly spots a white horse exploring a parking lot nearby, but when he calls to it, it doesn’t hear him. He calls to a woman standing a few feet away, but she doesn’t hear him either.

Back in New York, Vince (the capo that Dwight decked in the Paramount+ series’ premiere) confronts Chickie and demands that he give him the green light to kill Dwight. Initially hesitant, Chickie promises that he’ll speak with his father about it.

Dwight has Tyson take him back to Bodhi’s dispensary. After demanding to see Bodhi’s supplier, Tyson drives Dwight to the bank for a debit card, revealing another “complication”: Dwight needs a valid ID to get a card. The solution is a simple trip to DPS, a quick written test, and some not-so-subtle bribery, but that doesn’t stop Dwight from complaining. “This is why people break the law. They make everything legitimate so freakin’ complicated!”

The man who spotted Dwight at the mall last episode, Armand Truisi (The Sopranos‘ Max Casella), takes a call from an associate who informs him that Dwight is indeed in Tulsa. Armand, terrified that Dwight is there to kill him, panics and hangs up.

Equipped with a debit card and a license, Dwight heads back to the Mayo, but not before getting a call from Chickie warning him of Vince’s threats. Chickie tells Dwight that $100,000 will make it go away, but Dwight strongly implies that he has no intention of paying Vince a dime.

Stacy visits Dwight in his hotel room, where she confesses that she’s an ATF agent and asks him why he’s in Tulsa. She tells him she can’t help him if he gets into trouble, and abruptly leaves. 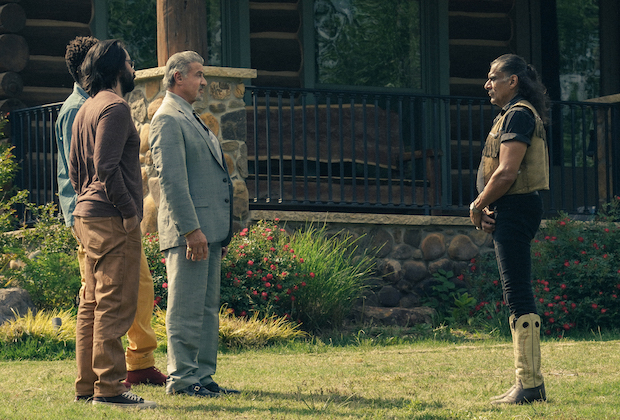 Dwight, Tyson, and Bodhi travel to meet Bodhi’s supplier, Jimmy “The Creek” (Outlander‘s Glen Gould) On the way there, we’re treated to some revelatory banter in which we that Bodhi’s real name is Lawrence Geigerman, and that Dwight was named after Dwight Eisenhower. Jimmy’s cousin, Bad Face, greets them as they arrive, and after a hostile exchange, they are ushered into the main house by a flustered Jimmy. Dwight negotiates with Jimmy over some crackers and THC-infused apricot preserve, proposes a price that satisfies them both, then leaves with Bodhi and Tyson. They stop in Commerce, Okla., to visit the childhood home of baseball star Mickey Mantle, whom Dwight idolizes. He reflects on fatherhood, thoughtfully thumps the rusted walls of the old Mantle barn, and ends up back at Bred2Buck.

The closing minutes of “Center of the Universe” see Armand calling the Mayo hotel to confirm that Dwight is staying there. Again, his suspicions are confirmed and he exits the conversation more terrified than before. Later, Tyson, whose father doesn’t trust Dwight (and why would he?), arrives home late, deepening his old man’s concerns.

The closing minutes fulfill the promise made in the episode’s opening scene: Dwight, with new debit card in hand, unlocks Christina’s contact information and calls her. Through her husband Emory, she makes it very clear that she doesn’t want anything to do with her father, and hangs up.

Dwight returns to the Center of the Universe and tearfully admits that he originally cut off contact with Christina for his sake, not hers. He closes us out with an apology, setting the stage for what will likely be an equally illuminating third episode….

What did yiu think of Tulsa King‘s second outing?