Disney Channel just gave us a Baxter family reunion 17 years in the making.

Friday’s episode of Raven’s Home welcomed T’Keyah Crystal Keymáh as Raven’s mother Tanya Baxter, marking the character’s first on-screen appearance since Season 3 of That’s So Raven back in 2005. (Keymáh left the show midway through its run to care for her grandmother, so Tanya was sent off to law school in London.)

Raven was thrilled to have her mother back on the right side of the pond for the first time in more than a decade, but Victor had a slightly more complicated reaction to his estranged wife’s unexpected return. Considering he never even told her about his heart attack, it’s fair to wonder how much the long-distance spouses speak to one another. His awkward inability to ask his own wife out to lunch was also troubling.

To make matters worse, Raven had a vision of Victor telling Tanya, “I can’t live like this anymore.” Traditional shenanigans ensued as Raven’s paranoia led her to crash her parents’ romantic sail boat ride. (“No one dumps my mama, not even my daddy!”)

Meanwhile, Booker and his associates tracked down the exact tree in which Victor and Tanya once carved their names — the perfect gift for Victor’s 60th birthday — but they fumbled the delivery. More specifically, they dropped the stump off the Golden Gate Bridge… and wouldn’t you know, it fell directly onto Victor and Tanya’s sailboat. 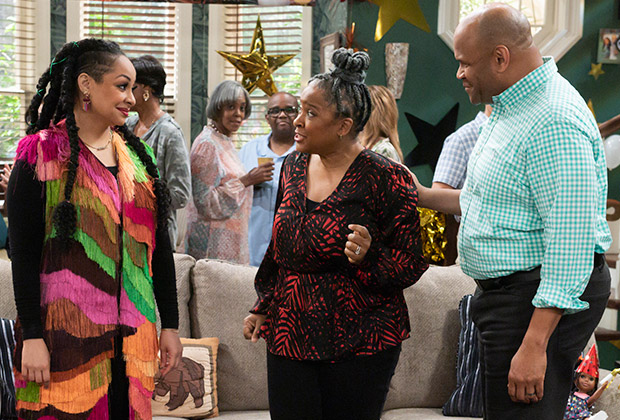 After being rescued by the coast guard and returning home, Victor finally told Tanya what Raven had been fearing. But here’s a shocker, if you can believe it — Raven misinterpreted her vision! “I just can’t live like this anymore,” Victor said. “We’ve been living apart for years. I thought I was fine with that, but I saw you today and I realized I’m not.” Instead of ending things with Tanya, however, Victor announced that he wants to move to London so they can finally be together.

Tanya was elated by this turn of events, even more so than Lazlo, who claimed Victor’s now-vacant bedroom as soon as he heard about the big move.

But fear not, Victor won’t be staying in London for long. Rondell Sheridan is expected back for the sixth season of Raven’s Home, which was announced at Disney’s D23 Expo in September.

Did you enjoy this long-overdue Baxter family reunion? Which other That’s So Raven characters are you still hoping to see on Raven’s Home? Drop a comment with your thoughts below.