Divorce isn’t exactly a barrel of laughs, but Hulu’s Fleishman Is in Trouble manages to find humor in the tale of a fractured New York family — and adds an intriguing mystery to boot. 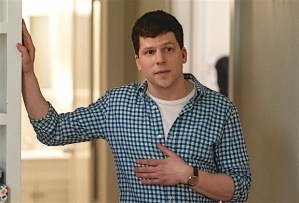 Thursday’s premiere introduces us to Toby Fleishman (Jesse Eisenberg), a mild-mannered doctor freshly split from his workaholic agent wife Rachel (Claire Danes). Toby is just starting to dip his toe into the world of dating apps and is bewildered by all the single women out there who want to talk dirty to him. (He’s always been hapless with the opposite sex.) We get flashbacks to Rachel complaining a lot and rushing off to work, and now she’s dumped their two kids in Toby’s lap a day early so she can run off to a yoga retreat. He calls her fuming, and they bicker back and forth, with her explaining that she needs “me time.” “All of your time now is me time,” he seethes.

Toby takes his kids — sullen Hannah and sweet Solly — to the 92nd Street Y, where one mom gives him a sympathetic hello: “We are your friends, too.” He recalls being stuck talking to the jerk husbands of Rachel’s mom friends, who look down on him for “only” being a doctor. He likes his job, but he does snap at his interns one day, confessing that he’s going through a divorce. One intern is happy to set him up on dating apps, and one weekend, Toby signs in and finds himself flooded with messages from eager women who love that he’s a doctor. He’s never been this popular! Toby specializes in treating the liver, which has the ability to heal itself… and he feels like he’s regenerating, too. 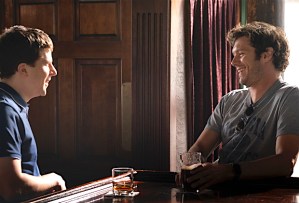 He also catches up with old friends Seth (Adam Brody), a slick womanizer, and Libby (Lizzy Caplan), a sarcastic housewife who is narrating Toby’s story. They lost touch over the years but reconnected when Toby reached out post-divorce. Seth encourages him to enjoy his newfound freedom: “The world is your oyster now. Lick it up.” He even invites Toby to a yoga class, which he whispers is a great place to meet women. Seth also thinks “marriage is for suckers,” having seen so many married men who are desperately unhappy and dread going home to their wives. Seth tends to go for younger women as well: “I just think the younger ones hate us less.”

Toby leaves his kids with their nanny Mona (“You ruin everything,” Hannah snarls at him) so he can go on a hot date with a girl named Tess he’s been exchanging dirty texts with. They have a drink and complain about their exes, but soon enough, they’re having wild sex — and we see in a montage that Toby’s been having a lot of wild sex with a bevy of different woman. He returns home invigorated and drops Hannah off for a sleepover, where Rachel will pick her up, but when Toby tries to confirm with his ex, he can’t reach her. He sends her a barrage of angry texts, and she never shows up to pick up Hannah, forcing Toby to rush over there instead. Rachel can be cruel to him, but it’s not like her to blow off her kids. Toby leaves her a furious voicemail, and Hannah is yelling at him, and Tess shows up at his door in a trenchcoat and lingerie, but flees when his kids answer the door. “Where is Mom?” Hannah keeps yelling. Yeah, where is Rachel?

Give the Fleishman premiere a grade in our poll, and then hit the comments to share your thoughts. (No spoilers, book readers.)