Tim Allen‘s Kringle has lost a bit of his jingle in Disney+’s The Santa Clauses, a six-episode continuation of the beloved Santa Clause film franchise that sees Scott Calvin contemplating his third act.

It’s been 28 years since Scott first transformed into Santa, and the world now suffers from a lack of Christmas magic. This becomes apparent to Scott when he is reunited with Sara, the little girl who left the allegedly lactose intolerant Claus soy milk in the original 1994 movie. She’s all grown up now, played in Episode 1 by Happy Endings‘ Casey Wilson, and things haven’t turned out as she’d hoped. She’s sleeping on her parents’ couch, and her life is “one endless, blurry long day broken up by Judge Judys.” It’s easy to see why someone in her position has stopped believing.

“Originally, [series creator] Jack [Burditt] had this scene later in the pilot, and when I read the script I said, ‘This, to me, feels like it should be the inciting incident for Scott’s journey,'” director/EP Jason Winer tells TVLine. “Not only does it connect fans to the original by seeing grown-up Sara, but we’re also talking about how the world has changed. This is the scene… where Scott feels that. Instead of a grateful little girl looking at him with awe and magic in her eyes, she is a depressed grownup living on her parents’ couch who throws a wine bottle at his head.” 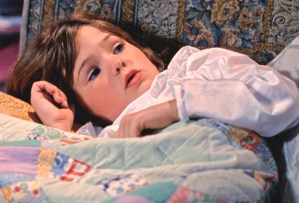 This is the moment that plants in Scott the idea that all those kids who grew up believing in him have stopped believing. “We’re presenting that in [Sara], but we’re also saying maybe that’s true of the world,” Winer explains. “And if that’s the case, how does he feel about that? How does he exist now?”

Allen, as seen in the video Q&A above, goes so far as to suggest that Sara is the emotional linchpin of the Santa Clause franchise. “This was a huge connection with the prior movie,” he says, and their reunion “sets him off because things are different.” It’s not just that Sara finds herself in a rut, but that websites like Amazon and its fictitious competitor Everything Now have accelerated the rate at which commercialism has abraded our collective Christmas spirit.

“Getting stuff delivered on the phone — and it’s delivered right away — changed everything about gift giving,” Allen posits. “This story is about how we’ve gotten so used to getting, we’ve forgotten about the substance of giving. Once we got that, it teed off so much of the motion of the story.” 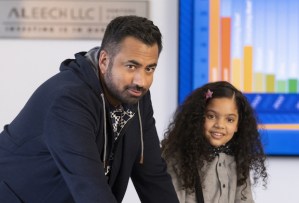 The premiere also introduces Kal Penn as Simon Choksi, CEO of the aforementioned Everything Now. Akin to Calvin in the first Santa Clause film, Simon is a single dad and businessman whose priorities are slightly out of whack. And it’s no coincidence that his initials are S.C. But viewers will have to wait to find out whether he’s built to take up the mantle of Santa Claus once Scott decides to retire.

“What I love about Kal’s character is that he represents one of those forces that is pulling at the fabric of magic in our world,” Burditt says. “Over the course of the series, [Everything Now] develops a technology… where you can press a button and a drone will be at your door in minutes, if not seconds. It’s a not-too-far-off exaggeration of where we exist now, and I love the way that we were able to say something about instant gratification and commercialism.”