BESPIN, Outer Rim — Star Wars fans across the globe concurred on Wednesday that the 11th episode of Andor was the Disney+ series’ “best one yet, dude,” due to its inclusion of a way-cool space battle and rubbery aliens that spoke funny.

“Um, best Andor episode ever!” said Dale Wilhoit, president of the long-dormant SWEATTOC (Star Wars Enthusiasts Against Taxation-Themed Opening Crawls), in a phone interview with TVLine. “After all these weeks of deftly exploring class solidarity, colonialism and the slow but steady rise of fascism, wow, did you see how the Fondor’s laser thing sliced that TIE fighter in half? Sick.”

The Nov. 16 episode of Andor — as its title, “Daughter of Ferrix,” suggested — also revolved around the off-screen death of Maarva Andor. Son Cassian was not present for the sorrowful event, though he and fellow prison escapee Melshi did enjoy a madcap adventure when they got snarled in a booby trap set by two utterly delightful Narkinians.

“It is so great to finally get some rubbery aliens on this show,” wrote Pat Korliss on his Badass Rebel Alien-ance blog. “Like, what’s with all the human characters? Snoresville. Max Rebo, baby!”

Ahead of Andor‘s late-September premiere, reviews by numerous critics warned that the early episodes were “slow.” Subsequent episodes, however, drew notice for the acting performances by Stellan Skarsgård, Denise Gough, guest star Andy Serkis and others, as well as the sharp scripts by EP Tony Gilroy (who co-wrote Rogue One, for which the series is a prequel.)

Even so, SWEATTOC’s Wilhoit said the consensus is that the series had been lacking in “aliens with funny mouths and appendages. And did I mention that sick laser thing?”

So widespread was the enthusiasm for Episode 11 that by noon Wednesday, the hashtags “#MakeEp11TheFirstEpisodeAndIgnoreTheRest” and “ReleaseTheMoreLasersCut” were both trending on Truth Social. (Many Bothans contributed to this report.)

All told, in this week’s episode…

CASSIAN and MELSHI dodged an nosy Imperial Reaper craft long enough to scale a cliff and get eyes on a possible way off Narkina, though when they boldly dashed for a nearby quadjumper, the aforementioned Narkinians sprung a gooey net that trapped the men. But after a brief scare (including talk of them being sold/traded for credits), Cass convinced the Narkinians to give them a ride to Niamos. Once back at the beach resort, Cass retrieved the lockbox he had stowed above the shower. Afterward, he carefully radioed his ticket booth buddy on Ferrix to get an update to Maarva… only to learn that his mother had passed away. 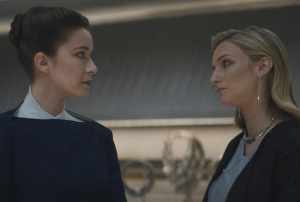 DEDRA, too, got word that Cassian Andor’s mother had died, so she instructed the Ferrix troops to allow a proper funeral, in hopes that Cassian might try to attend. Similarly, VEL boldly confronted KLEYA at the gallery, to ask about Luthen’s whereabouts and to report via CINTA that Cassian Andor’s mother had died, so she was heading back to Ferrix to tie up that loose end. SYRIL, too, (barely) learned about Maarva, from good ol’ Sgt. Mosk, who still has his ear to the ground on Morlana One.

Elsewhere on Ferrix, BIX looked simply awful — exhausted, harrowed, shaken — after her torture at the hands of Dr. Gorst. As such, when asked whether Anto Kreegyr was her “buyer,” she couldn’t even respond. 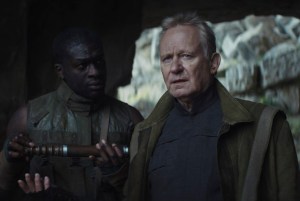 The actual LUTHEN flew off to meet up with SAW GERRERA and rebuff his offer to join Kreegyr’s raid on the Spellhaus power station. When Luthen confided that Spellhaus was a trap that he needed to let happen, else his ISB source get burned, Saw got all kinds of paranoid, wondering if Luthen himself was ISB. Luthen proved himself by holding a gun to Saw’s head and doing nothing, and arguing that if he was ISB, he’d have let Saw and his men also get killed in the Spellhaus massacre.

On his way back, Luthen drew the attention of an Imperial Arrestor Cruiser, which he tried to trow off his scent with a bogus transponder code. When the cruiser locked its tractor beam on the Fondor, Luthen and his on-board droid released metallic countermeasures that shredded the tractor beam dish. Then, after going to battle with a handful of TIE fighters that had been deployed — slicing up the last two with static laser beams that emitted from his wings — Luthen threw the Fondor into hyperdrive, irking the cruiser’s captain. 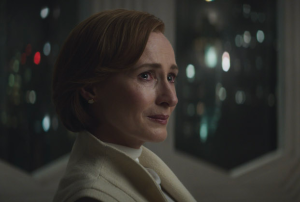 Lastly, after her unorthodox assignation with Kleya, Vel paid cousin MON MOTHMA a visit, where she and we learned in greater detail how the senator’s regular moving of family monies into rebel accounts risked being found out after one of her accounts fell 400,000 short before she could replenish it. Ergo, her need to possibly retain Davo Sculdun’s particular set of skills. Speaking of which, the cousins’ chat occurred while LEIDA was in the next room partaking in some sort of ceremony/rite of passage that seems to be part and parcel with Chandrilan betrothal customs…?

What did you think of Andor Episode 11, and what are your predictions for next week’s season finale?