After starring as Law & Order ADA Serena Southerlyn from Seasons 12-15,  Elisabeth Röhm returned to direct last week’s episode, which was titled “Only the Lonely.”

The opportunity came as part of NBC Universal’s Female Forward program, which is aimed at greater inclusion of women directors in scripted programming.

“It was the first time I had done episodic [television], and I was really excited to have the support of the [Dick] Wolf camp and NBC,” Röhm tells TVLine.

The episode centered on a con man accused of murdering a crisis consultant who threatened to expose his scam. Grace Pollard (played by Orange Is the New Black’s Alysia Reiner), a key witness on the case, was hesitant to testify because of how damaging her romantic connection to the defendant would be to both her career and reputation. However, ADA Maroun (Odelya Halevi) convinced the New York power player to take the stand, because of what it would mean for other women.

“I wanted [Odelya] to step into every single scene with her guns blazing, knowing that she had legal precedent behind her, but also just wanting so much to be a voice and a protector of all of these women,” Röhm explains. Having Maroun act as a defender of all women during the trial after pushing Grace to testify was exciting for the Law & Order helmer. “That was very specific and important to me,” she notes.

Hugh Dancy’s Nolan, meanwhile, played a more supportive role in the courtroom, giving Maroun the space she needed to make her case. With those scenes, Röhm says she “wanted to explore observing somebody that you care about coming into their power and finding it incredibly attractive.” Not in a romantic way, but rather as “human beings who see each other, respect each other and work together. And [having Price] observe her coming into her power like that — finding her voice — I think he was very moved by it.” 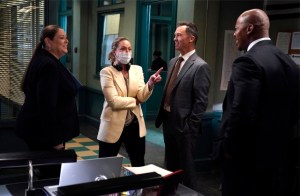 The episode also reunited Röhm with her former costar Sam Waterston, who plays DA Jack McCoy. “I couldn’t believe it. I was thinking myself, ‘How was I here not too long ago as a newbie, the next girl in line to play his sidekick, now getting the privilege to be a collaborator like this in a different way?'” she recalls of the experience.

“He loves what he does [and] you can see it,” she adds. “He’s still so good and committed to his career, and he was really generous with me, really complimentary and rooting for me to succeed. He knows how much I love directing and how much I’ve been working on reinventing my career as a director.”

With Röhm focused on directing, what does that mean for a potential on-screen return as ADA Southerlyn? While there are currently “no plans in the works” for an appearance, she confirms that it has been a conversation.

“At this point, I would really love to just return in the captain’s seat and direct for them again, but I’m open to anything,” she says.

What did you think of Röhm’s Law & Order directorial debut? Do you want to see her back as ADA Southerlyn?