Change was in the air as The Crown wrapped up its penultimate season… and more than one relationship was changing along with it.

Season 5’s finale opens with Dodi al-Fayed telling his father Mohamed about a house he wants to buy in Malibu. (He has to act fast, “or I will lose it to Michael Douglas.”) He also wants to introduce his dad to his new girlfriend… and it’s not Diana. Yet. She’s busy phoning into a call-in show to vote “no” on keeping the British monarchy and cackling to herself. Elsewhere, Tony Blair and the Labour party are poised to sweep Parliament, and the British colony of Hong Kong is due to be handed back to the Chinese, so the times, they are a-changin’. The Queen sees the handover as undignified, so she sends Charles to represent her in Hong Kong while she heads to Canada. 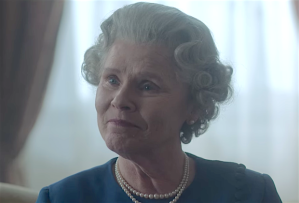 Dodi brings his actress girlfriend Kelly Fisher to London on a private jet to meet Mohamed, but he’s unimpressed: “Isn’t it enough just to f–k her?” (They speak in Arabic, leaving Kelly and Mohamed’s wife out of the loop.) Mohamed also chides Dodi for making him bankroll a string of Hollywood flops, telling him, “The only thing you have a talent for is women.” He still thinks Dodi could hit “the jackpot” there, though. (Hmmm.) Tony Blair and the Labour party win big on election night, and John Major gracefully steps aside, telling Elizabeth he’ll do what he can to save the Britannia, even though Labour is bound and determined to decommission her. (Metaphor alert!)

In her first meeting with Blair, Elizabeth brings up the Britannia, but Blair has a better idea: a brand new yacht, privately financed that the government could lease. He suggests the name New Britain, which Charles likes, of course. But Elizabeth would rather have no yacht at all, so Charles’ trip to Hong Kong will be the Britannia‘s final voyage. He’s even forced to fly there in business class (gasp!) while Blair and his cronies laugh it up in first class. Back in London, Mohamed spots Diana sitting alone at the ballet and invites her to join him and his wife for dinner. She confesses she’s “more glum than ever” after the divorce and doesn’t want to be around for Camilla’s birthday, which is coming right up. So Mohamed invites her to bring her boys and come to Saint-Tropez with him and his family. He’s even got a big gleaming new yacht! 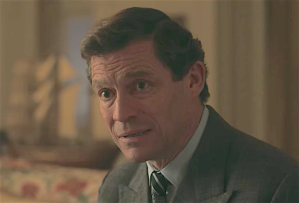 In Hong Kong, Charles makes a speech commemorating the handover to the Chinese — and pulls Tony Blair aside for a private chat afterwards. Blair apologizes about the Britannia, but Charles waves that off: “There’s no point clinging to the past.” In fact, he thinks “the royal family needs a similar renovation.” He’s chafing at the restraints his family has put on him, specifically about remarriage. Elizabeth catches wind of this and confronts her son, reiterating that she doesn’t approve of him marrying Camilla. She pulls rank as sovereign… “which will one day be me,” Charles notes. “One day, but not yet,” Elizabeth counters. He calls her values old-fashioned and worries that “the world will move on, and those who come after you will be left with nothing.”

As Elizabeth takes a sad final tour of the Britannia before it’s scrapped, Dodi proposes to Kelly, and Diana packs for her Saint-Tropez trip, with Mohamed enjoying life aboard his shiny new yacht.

Alright, loyal subjects: Give The Crown‘s finale — and Season 5 as a whole — a grade in our polls, and then tell us what you think in the comments.