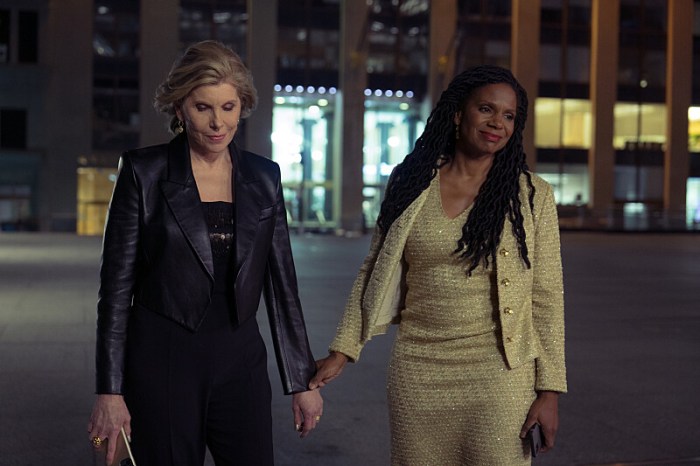 In the wake of getting dumped by Diane in last week’s penultimate episode, Kurt made a last-ditch attempt to win his wife back that began with him tendering his resignation at the NRA and concluded with him in an epic cardio duel with his chief romantic rival, Lyle.

In the end, Diane somewhat shockingly chose her GOP-aligned hubby over dreamy ketamine crush Lyle, despite eloquently pointing out to the former just moments earlier that “You can’t correct a decade of disagreements with one grand gesture.”

According to series co-creator Robert King, the resolution of the season-long love triangle was the subject of a heated debate in the writers’ room “right up to the day” production on the finale began. Ultimately, the EP says that he “ended up on Team Kurt” largely due to the couple’s rich history, which dates back to the early days of The Good Wife.

“I was a little worried that if [she picked Lyle over Kurt] that it would deny those 13 years,” he explains. “We’ve had Gary Cole on [almost] every season of The Good Wife and The Good Fight, and it felt weird for dramatic reasons to come to the end and go, ‘Yeah, forget that.'”

Fellow co-creator/EP Michelle King concedes that the Diane-Kurt reunion represents a bit of a fantasy, especially given the characters’ stark political differences. “They made that commitment, they took those vows, they knew what they were getting into and they’ve always managed to get along in spite of true differences,” she notes. “So it’s sort of aspirational that they will continue with that.”

Do you think Diane made the correct choice? Vote in the poll below, and then grade the series finale.