No, your eyes are not deceiving you: Ghosts is giving viewers double the Pete in this Thursday’s episode (CBS, 8:30/7:30c).

When a production crew for the TV show Dumb Deaths comes to Woodstone to film an episode about Flower’s unfortunate demise, the focus quickly shifts to Pete’s own unlucky passing, with a super method actor (played by UK Ghosts star/co-creator Mathew Baynton) brought on to portray Pete in a recreation of that fateful day. As Baynton’s character attempts to wrap his mind around how Pete ended up getting shot by an arrow — maybe he was a drunk, the thespian suggests — Pete comes to a surprising realization about his death.

Below, his portrayer Richie Moriarty reveals how the episode harkens back to the show’s pilot and previews Baynton’s bizarro version of Pete.

TVLINE | This week’s episode is a big one for Pete, and we find out some stuff about the day he died. Were you surprised that there was more to Pete’s death than was already revealed?
Yeah, totally. It was so fun to read this episode because the more information we get about the backstory of our characters, the richer they feel to us and to the audience. So it’s so fun, first of all, to see a flashback for he and his wife, to see a little window into Pete’s marriage, although probably they would admit not the best day in their marriage… And then for Pete to get to see this old Pinecone trooper of his come to the mansion and share what she remembered from the day, I think, was very special for him. 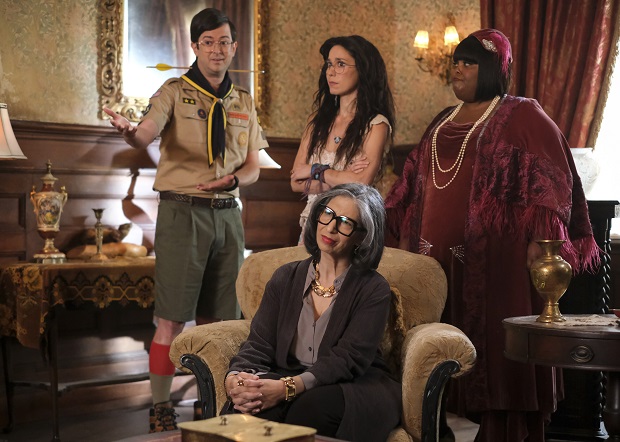 TVLINE | What does this episode bring up for Pete in terms of his life from before he died and then also about his death?
There are so many themes of legacy and how you want to be remembered in this show, and I think for Pete, we really learn that he took what he did as a Pinecone Troop leader very seriously and really wanted to leave an impact on the kids that he worked with, and he gets a nice window into the legacy that he left as a Pinecone Troop leader by the end of the episode, which is incredibly special to him. But then he does really have his death reframed in an interesting way.

TVLINE | What can you tease about the truth that’s revealed about the day that Pete died?
In the pilot episode of Ghosts, Pete references this donut hole fight that he had with his wife, and I guess I would just say there’s much more to that fight than we’re aware of and like the impact that fight had on his death. Especially for the Ghosts super fans who remember what was like a pretty small moment in the pilot, it’ll be interesting for them to see that flashback and learn more about that moment…. I just loved how the writers made that a fuller picture and brought it back in this episode. It’s a very fun tip of the cap to the pilot. 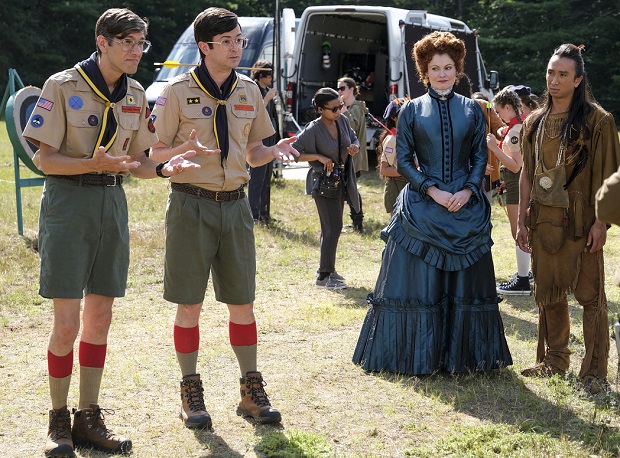 TVLINE | One of the other really fun things in this episode is guest star Mathew Baynton, one of the stars and co-creators of the UK Ghosts. What was it like to have someone from the original show come in?
Man, it was such a special moment. I’ll start by saying that Mathew Baynton, what a dream to have [him] on set with us. I mean, all of the original cast of BBC Ghosts have been so insanely supportive of us from Day 1, including Jim Howick, who plays a very clear representation of my character, Pat, in the BBC version. They’ve just been really, really champions of ours from Day 1, which has been so encouraging because when you’re taking on a show that already exists in some format, it’s intimidating. That show is great, and you want to do it a good service and make the show as strong as it can be. So it’s been really nice to know that they’ve been on our side.

But [Mathew] was just so incredibly lovely and collaborative and warm. It was just so nice to have him here. It’s really kind of special to witness Matt coming onto our set for the first time, because he had this really special moment of seeing this set existing in Canada from this show that they brought to the U.S., and we’re kind of in this like weird, alternate Ghosts universe… I don’t want to speak for him, but we spoke after he came, and I think it was really incredible for him to see like this small idea that he and his friends had years ago and this is what it has become, this show across the pond, and it’s doing well. He was just so lovely about the whole thing, and we had such a wonderful time, and he’s so damn funny in the episode.

TVLINE | What was it like to watch someone else come in and play “Pete,” this character that you’ve been playing for almost two seasons?
It was bizarre. It’s funny, too, because our costumes and props [departments] did such a great job, because he looks very close to me, but everything is like a little bit off, which was just very funny. So he reminds me of like the bizarro episode of Seinfeld where all the main characters have a bizarro version of themselves, and he was very much like Bizarro Pete. And then just to see his physicality and his embodiment of the role, it’s just super funny. It was really, really great to get to see his interpretation of Pete. It was hilarious. 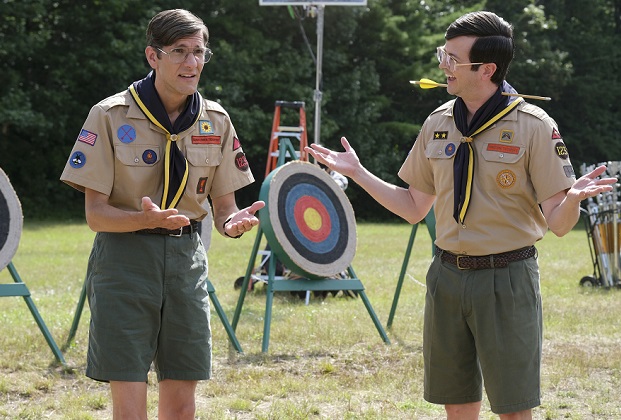 TVLINE | How would you describe his version of Pete?
He goes desperately looking for like, “What is the magic behind this man? What drives him?” and he’s grasping at straws at a certain point, and he, basically, decides like, “Hey, what if he’s a drunk?” — and [is] able to get a flask — “I’ll play this guy as a drunk. That’ll give me something to kind of sink my teeth into.” So it [is] just very funny to like see this actor who’s trying to find anything about this real person to play, and obviously, the [Dumb Deaths] producers [don’t] really care at all about who Pete really was. It [is] much more like, “You want a flask? Fine, we’ll get you a flask. We don’t care, whatever’s going to make you happy.” So it [is] just very funny to see this guy clamoring for some foothold on this [person] who he [is] portraying and to see Pete horrified at all the suggestions he [is] making, like playing him as a drunk or playing him as being on pills, as he says at one point.