FX’s Atlanta has delighted in messing with our minds for four seasons now, so it’s fitting that Thursday’s series finale had us feeling one last time like we were trapped inside a surreal (and hilarious) dream. 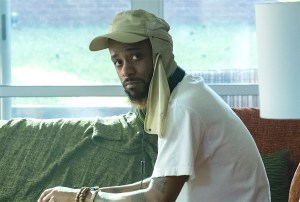 Darius is lounging on the couch watching Judge Judy while Al and Earn get ready to go eat. Darius declines their invitation to join them, though, saying he has a “dep date,” i.e., an appointment to float around in a sensory deprivation tank. (“It’s like being in the womb again,” he says with awe.) Al and Earn go eat at a Black-owned sushi restaurant to support their community, but Al really just wants to go to the Popeyes across the street. He also notices that the sushi place used to be a Blockbuster; the hollowed-out sign is still out front. On his way to the deprivation tank, Darius stops to pick up a prescription for a friend and ends up talking with a woman who’s also spent some time in the tank, but she quit because the hallucinations became too intense and she couldn’t tell what was real. Darius has a trick to anchor himself, though: He looks at a TV and sees whether Judge Judy is, um, curvier than usual. “If I see her and she’s thick, I know I’m in the tank.”

Van joins Al and Earn at the sushi restaurant — her friend is an investor — and Al is still eyeing that Popeyes. Van is feeling the same way, honestly: “We’ll go after, I promise,” she assures him. Darius is walking to the deprivation tank place when he runs into a old friend named London, who gives him a ride in her car. She offers him some weed, and she’s also drinking vodka out of a water bottle: “I’ve been macrodosing all day!” She gets pulled over by the cops and does her best to sober up, and when the cop asks her if that’s water in her bottle, she chugs the whole thing to prove it (!). The cop makes her step outside for a sobriety test, which she seems to pass — did he really just ask her how many seasons of Homeboys in Outer Space there were? — but then she steals the cop’s gun and speeds off in her car, hitting a kid on a bike on the way. She runs away blaming Darius… who wakes up in the sensory deprivation tank, realizing that was all a tank-induced hallucination. He takes a break in the tea room, but something’s still off, so he grabs another customer by the shoulders and yells, “Wake up!” in her face. That gets him promptly kicked out, even though he protests: “I thought it was a dream!” 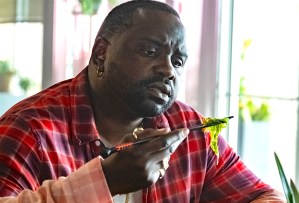 Al is suffering through the sushi meal, and Van isn’t liking it much, either: “The rice has corn in it. I can’t.” Earn tries to convince them to give it a chance, but the server offering them some “hot white Hennessy” is the last straw for Al. As for Darius, he visits his sick brother, bringing him the prescription he picked up, and they have a sweet conversation where Darius says he misses him. But when he looks at the TV? Judge Judy is thick! He wakes up back in the tank, and the employee there tells him he’s been in there for “30 minoots”… which triggers him to wake up again! Is this real life? Al is ready to walk out of the sushi restaurant when the server tries to give them poisonous blowfish cheek, but he’s stopped by the restaurant’s militant, bow-tied owner, who laments that they’re preparing everything in the true Japanese tradition, but because they’re Black, everyone assumes it’s dirty. He tells Al that the famous Popeyes chicken recipe comes not from a Black woman, but from an Italian man. “The problem with us is we don’t trust each other,” he says as he urges Al to try the blowfish — and orders his staff to lock the doors.

Luckily, Darius bursts in just in time to rescue them, with them peeling out in a crazy purple convertible with zebra stripe seat covers. (And he got them Popeyes, too!) Back at home, they enjoy their fast food and giggle together, asking Darius where he got the car. He stole it, he says, but he’s not worried about facing charges: “I’m still in the tank.” Earn tries to tell him this is all real, but Darius stands firm: “Maybe it’s just my dream, and you were just in it. Always have been.” The other three go off to smoke weed and laugh and talk, and Darius watches them through a window before turning back to the TV to see Judge Judy. Is she thick, though? We don’t see what Darius sees. We just see him watch her… and smile.

How’d you like that Atlanta goodbye? Grade the series finale — and the final season as a whole — in our polls, and hit the comments below to share your thoughts.