This week on DC’s Stargirl, as everyone dealt with the aftermath of The Melee at the Mahkent House, Pat and Sylvester schooled everyone on a new foe and the Blue Valley voyeur was unmasked — for better or for worse.

In the wake of the big fight last week, Pat and Sylvester tried to make nice with Grandpa Mahkent after he got released from the hospital. Sofus maintained that “there is no coming back” (at least for his wife) from their son being murdered, so he advised Pat to take his family far away from Blue Valley before anyone else gets hurt. Grandma/Lily meanwhile paid Barbara a visit to give Courtney’s mom a scare, but Paula saved the day with a well-aimed “near-miss” from her crossbow. 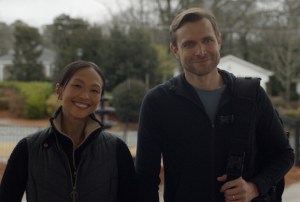 Later, Larry and Paula aimed to do the Whitmore-Dugans and all of Blue Valley a solid by appealing to Lily and Sofus themselves, speaking as Jordan’s former allies and explaining how forgiveness can pave a way for Cameron to have a normal life. Sofus agreed, and though Lily wasn’t as quick with her own answer, it was apparent later that she, too, saw that it was time to move on.

Elsewhere, Cameron pressed Courtney to tell him who killed his father — and she, covering for Mike, claimed that Jordan’s death was her fault.  Cameron in turn told his girlfriend he never wanted to see her again.

Amidst all of this… Mike and Jakeem had gone missing after discovering that gorilla-like beast at the farm. Whilst fleeing through the woods the next day, they got caught in a net trap that had been laid by Cindy (who was trying to catch the gorilla herself, suspecting it’s another of her dad’s experiments). Mike and Jakeem made their way to the Pit Stop to reveal that they were OK and share what they had seen. Pat and Sylvester immediately recognized the creature they described, and later, back at the house, schooled everyone (except a pouting Rick) on Ultra-Humanite, a most formidable old foe of the JSA — a scientist who first implanted his brain in the body of a Hollywood actress (who then won an Oscar!), and then inside a gorilla (with help from Dragon King). Sensing that the series finale was just weeks away, Courtney surmised that Ultra-Humanite is “the new Eclipso,” as in a Big Bad they will all need to team up against, Mahkents included.

But you know who won’t be in that fight…? 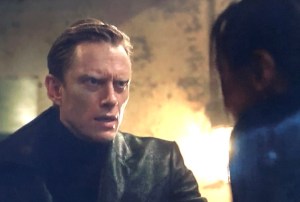 That night, Larry and Paula are walking down Main Street, celebrating their negotiation of a truce with the Mahkents as well as daughter Artemis making the Nebraska college football team as its first female QB, when a trail of gym flyers lead them to a manhole. Descending into the sewer, they find the bank of monitors from where whomever has been spying on everyone. The masked, robed figure we had seen previously emerges from the shadows and promptly stabs Larry, and then Paula. And as the figure removes its mask to reveal himself to be an alive Jordan “Icicle” Mahkent, Larry and Paula quickly freeze over from his touch, and die.

What did you think of Stargirl‘s third-to-last episode ever?