After suffering a humiliating defeat, the Ducks’ morale was in the pits. Losing to Team Dominate was one thing, but doing so while their opponents played on their weaker sides was utterly deflating.

In this week’s episode of The Mighty Ducks: Game Changers, Coach Alex tried to lift their spirits with a field trip to the Anaheim Ducks’ home arena. She called in a favor to Coach Bombay (he was mentioned, but did not appear), who set up a meeting with the NHL team’s coach for some much-needed guidance. Unfortunately, said coach was unavailable, and it looked like their outing would be a bust.

Meanwhile at the performance center, Evan ran against A.J. for team captain. An impassioned speech and ice-bath competition later, he was voted their official leader. 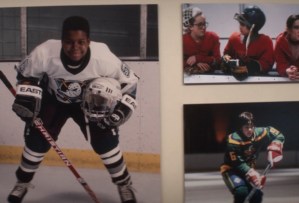 Gabe — the assistant helping with the Ducks’ visit — realized that Alex was at her wit’s end and switched gears to remind her why the team didn’t need a big-league coach for help. He showed her a wall of photos of the OG Ducks, including Kenan Thompson’s Russ Tyler and Joshua Jackson’s Charlie Conway, who were scrappy underdogs before beating the odds in major championship tournaments. Like the Ducks who came before, Alex’s team just needed to “think small” and “figure out that weirdo awesome sideways” for the kids.

Side note: The “freestyle” was cute, but why did they have Max rapping with a blaccent?

Taking his advice, Alex brought the team on the ice for an impromptu practice, where they learned how to shoot Russ’ signature “knuckle puck” shot. Plus, Sam and Gertie became the Smack Siblings, their answer to the OG Ducks’ Bash Brothers. Plus, the team voted Jace their new captain because, as Sofi put it, he “loves the game more than anyone else.”

That moment was followed by real-life Anaheim Ducks players Trevor Zegras, Troy Terry and Max Jones joining the team on the ice. 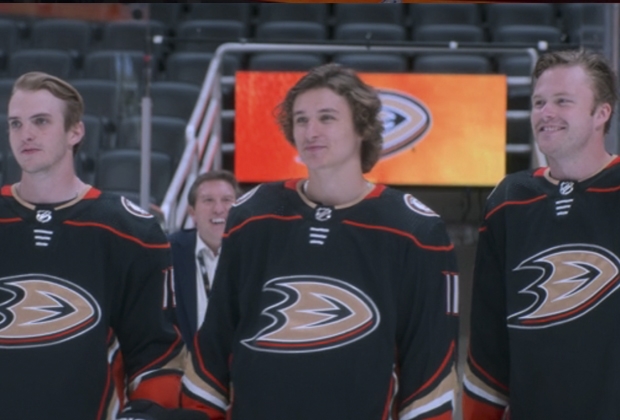 Coach Cole was ready to admonish Alex for taking her team off-campus until she showed him a video of his son skating with the NHLers and looking so excited to be playing. Cole hugged Alex and then… kissed her. And then he did it again!

How are we feeling about The Mighty Ducks: Game Changers Season 2 so far?