Any lingering doubt that The Cleaning Lady‘s Robert Kamdar is an extremely formidable foe was sufficiently wiped out during Monday’s episode of the Fox drama.

In Episode 7 of the sophomore run, Robert attempted to sniff out which of his untrustworthy associates facilitated the FBI raid that went down at Cortes’ mansion two weeks ago. The gut-wrenching final act found Robert giving Arman a bleak ultimatum: Arman had to kill Maya, the onetime informant with whom Garrett has been entangled, or one of Robert’s men would shoot Thony instead.

Viewers were spared from seeing the actual moment when Arman pulled the trigger, but he indeed killed Maya, under great duress. And though Garrett is currently unaware of who murdered Maya, he did learn at the end of the hour that she had died.

Below, co-showrunners Miranda Kwok and Melissa Carter unpack Monday’s distressing installment, including how Maya’s death will hit Arman, Thony and Garrett differently in the weeks ahead.

TVLINE | In so many crime shows, we see the protagonists manage to get out of any scrape; there’s always a loophole, even when their backs are against the wall. But that’s not the case here. It has to be Maya, or it has to be Thony. Why did those stakes feel appropriate at this point in the season?
CARTER | We felt that Maya was the big mistake that Garrett had made. It was the one thing where he really wanted to right the wrong. He had gotten into a relationship with her, he’d crossed the line, had an affair, destroyed a marriage. But he’s not able to [right the wrong]. Ultimately, all these little decisions that both he and Thony have made culminate in this tragedy. It just felt like the best, most surprising thing that we could do — not have it be a happy ending.
KWOK | Maya was definitely a cautionary tale for Garrett… This is a crime story and there’s a lot that our characters are faced with, but there are consequences. We don’t want to make it easy for our characters, and that was a big thing. When you enter this world of violence and unpredictability, you can’t just always get out. We try to allow our characters to be the hero, to make the smart choices, to be the smartest person in the room that can get out of anything. Thony is that, a lot of the time. We wanted this to be one of the times where that doesn’t happen. She is taking a darker turn this season, and we really wanted to show the consequences of those choices. And having these two storylines collide in the middle of the season felt right for us, too. 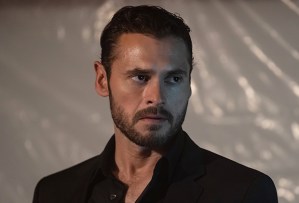 TVLINE | Arman has spent all season trying to prove that he’s not a thug and not a killer, and yet he was just forced to lean into that persona. What does that do to him, psychologically, moving forward?
KWOK | It definitely makes him want to get out more… Not only did he do this to save [Thony], but she was the one watching him do it, so that hurts even more and that drives him to take riskier steps to take down Kamdar.
CARTER | It really is the moment that proves he’s willing to do anything for Thony. He’s killed for her. He’s gone to great lengths to put himself at risk. And she gets to see that moment of vulnerability afterward. No words are even necessary in that moment, when she reaches across the car and comforts him. They’re in it together. They’ve both now seen what Kamdar can do, and they’re once again completely solidified in that horrible moment… There was some debate, and Miranda and I felt really strongly that he should be able to cry, he should be able to show his emotions and not always have to be the tough guy to whom killing means nothing. We fought for that moment because we were a little alone on one side of it. To me, when you see him show that emotion, it means not every death is the same. For his day job working for Kamdar, he can kill people, he can beat people up for money. But when it comes to a choice between two innocent people, it still has an effect.
KWOK | And Thony knows that Arman had no choice. This isn’t something she’s going to hold against him. It will bond them. 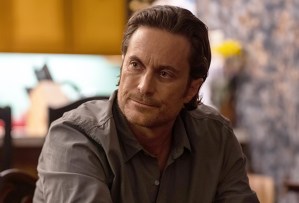 TVLINE | And then, of course, there’s the Garrett of it all. Would you describe this as a breaking point for him after seeing that Maya’s dead?
KWOK | Absolutely. It’s going to further charge him and drive him, and he’s going to be a man on fire after this to find out who killed Maya. That was an interesting challenge for us: How do we have him find out, or not find out, in a more unpredictable way? What can we do with that in terms of the character relationships? What’s going to happen when he does find out who pulled the trigger?
CARTER | There’s also the moral weight on him. Garrett was feeling that if he could just right the wrong, if he could just get her safely out of Vegas, change her identity, make sure her life could continue — it’s not that it would have absolved him of his guilt for crossing the line and pushing her into crime, but it was a step toward the healing. And now, he feels responsible for her death. No matter who pulled the trigger, he’s feeling like all of his choices ultimately led to her death. It’s a very dark turn for Garrett, too. It really drives him in the back half of the season, in a vendetta kind of way.
KWOK | Especially since he was so close. He was so close to getting her out, and he even killed somebody for her in a way that wasn’t right. Garrett himself has always believed there’s a good and bad, a right and wrong, there’s a clear line. And he’s now learned this season that it isn’t so clear — that he himself has made a lot of dark choices and wrong choices.

TVLINE | In this episode, we also saw the investigation into Marco’s death wind down in several ways. Will that case be revisited, or is it wrapped up?
CARTER | Yeah, we wanted to wrap it up. We wanted to have Chris start his journey of healing. We really brought him to a low place, dealing with his guilt. And this gave us a chance to cross the stories in an interesting way. Garrett’s guilt about killing Cortes in the previous episode — that he killed an unarmed person, that he’d stepped over the line, that he had all the good reasons to do it in his mind — it allowed him to absolve somebody else of their guilt. Chris was not able to admit what happened to anyone, except in this instance. He allows himself to confess and unburden that guilt that he’s been carrying. We felt that was the stronger story than the law side. What would have actually happened, or what could have happened, wasn’t as important as Chris being able to get that relief in finally telling the truth.
KWOK | We really wanted to explore how this family, as an undocumented family, responds differently than other people would under certain circumstances. This was another aspect of that. Because of their fears and because they have no status, they reacted, and that had a snowball effect that led to a lot of unfortunate consequences. We wanted to show that telling the truth is what was actually going to help Chris heal.