While The Flash‘s Barry Allen & Co. have been known (though not recently!) to have fun times at S.T.A.R. Labs, the fact is that Titans‘ take on the research facility is just plain fun.

In the superhero team-up series’ Season 4 premiere on HBO Max this week, the Titans’ road trip to San Francisco made a pit stop at S.T.A.R. Labs in Metropolis, where Connor, alas, learned that his “dad” would not be able to make it to their first meeting, seeing as he was saving countless off-world lives.

But since Dick, Kory et al were there anyway, S.T.A.R. Labs’ Director of Special Projects, Bernard Fitzmartin (played by James Scully), and his team not only offered a 10-cent tour of the cutting-edge facility, they also sprung a few surprises. Gar, for example, was outfitted with a gizmo that will keep him from turning up naked after beast-ing out (though his first demo had disastrous ramifications), while Starfire’s effortless destruction of a block of promethium revealed that she has but scratched the surface of her abilities.

Elsewhere, Connor using AR glasses got to see Superman zipping across space in real time, and Tim was gifted with a retractable bo staff, which Dick has promised to train him to use. And as the Titans stepped outside to resume their road trip, Bernard revealed that Bruce Wayne had footed the bill for a tricking-out of their RV, which now (somehow) also houses Dick’s sports car.

Surveying Titans‘ spirited take on S.T.A.R. Labs, showrunner Greg Walker told TVLine, “I was so glad we went there,” likening it to “Charlie and the Chocolate Factory without the Oompa Loompas.”

“The idea of going into this world where it’s a big candy store” is what informed Titans‘ version of the famous DC comics destination, Walker said. Not that the pit stop was all fun and games. “Metropolis seems to be fun for everyone, but in that there are troubling elements that people discover,” Walker noted. “Gar doesn’t quite have a sense of his powers, Kory starts the mystery of what her destiny is supposed to be, and Tim’s internal story is launched as well.” 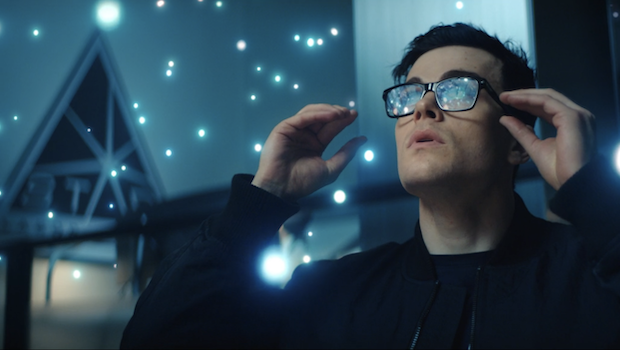 What also differentiated Titans‘ depiction of S.T.A.R. Labs from The Flash‘s is the signage on its veritable front door.

“We used what is the iconic S.T.A.R. Labs logo” from the comics, whereas The CW’s Arrowverse series designed a variation of their own, Walker pointed out. “We took ours from canon.”