Going into Night 2 of The Voice’s Season 22 Knockouts, it looked like we had a couple of new frontrunners to win. Based on the poll that followed TVLine’s recap of Monday’s episode, Team Legend’s Parijita Bastola and Team Gwen’s Kique were your reigning favorites.

Meanwhile, the tide seemed to have turned for Team Blake’s bodie; y’all still liked him OK, just not, you know, as much as you used to seem to. Did any of Tuesday’s contestants make as big an impression as Parijita and Kique? Read on, and we’ll discuss.

Team Legend: Omar Jose Cardona singing “Radioactive” (Grade: C) defeated Ian Harrison singing “Cough Syrup” (Grade: C+) and Morgan Taylor singing “I Got You (I Feel Good)” (Grade: B) | First behind the mic, Ian left a big question mark above my head: Did his rendition of Young the Giant’s hit feel tentative because it was full of emotion or because he was actually unsure of himself? The overall impression that he left was that the latter case was true. Next was Jose, who was utterly, utterly done in by a disastrous song selection. If he hadn’t hit a couple of nice, long notes on his Imagine Dragons cover, I wouldn’t have believed that the guy hopping around on one foot (literally) was the same one who’d blown us all away last week. That left the field wide open for Morgan, whose jazzy take on James Brown was more weird than winning. But her performance was still more across-the-board strong than the guys’. (Rendition? Zzz. Vocal? Solid.) Despite that, knowing what Omar is capable of, I’d have stuck with him.

Team Camila: Eric Who singing “Ex’s and Oh’s” (Grade: C) defeated Jaeden Luke and Reina Ley | In a super annoyingly abbreviated Knockout — in which we didn’t hear either of Eric’s opponents sing a note! — he delivered what looked like a really fun performance that got his coach talking about how we love acting and dancing as well as singing. But his acting and dancing just aren’t so exciting that we can overlook the fact that he’s a nice, charismatic guy… and just an OK singer. 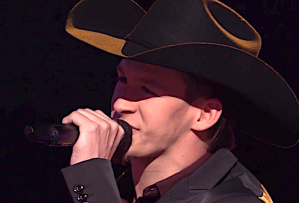 Team Blake: Bryce Leatherwood singing “Colder Weather” (Grade: B) defeated Jay Allen singing “Prayed for You” (Grade: D+) and Kate Kalvach singing “Anyone” (Grade: B-) — Kate stolen by Camila | Up first, Bryce delivered a lovely, intimate Zac Brown Band cover that grew and grew until we realized that he actually sounded his best on his lower, quieter notes. He handled the big, belty ones fine, but it’s when he’s using that “Whoa!” deeper voice that you’re really like, “Hello!” In the middle, Jay tried to channel his happiness at being engaged to the love of his life. But it felt to me like what happened was that he slipped out of the pocket. What resulted was messy and not altogether pleasant. (When he was done, Camila even turned to Blake and said, “I feel like something was going wrong there.” Turned out, he was overcome with emotion since his fiancée was present.) Finishing out the show, Kate had Gwen going “Beautiful!” throughout her performance, but it left me as cold as I get when I can’t pick out a snack from the fridge. This may just be a personal taste thing. Camila called Kate’s one of her favorite voices of the season, and John said that she was a revelation. Perhaps tellingly, her coach only noted that everyone else had really dug Kate.

So, who worked you up and who let you down on Tuesday? Vote in the poll below, then comment away.