HBO’s The White Lotus has invited us to stay for another season, this time at an Italian beach resort — but don’t worry: Rich people have problems there, too.

Sunday’s Season 2 premiere begins with vacationer Daphne (Meghann Fahy) taking one last dip in the ocean before she leaves — and bumping up against a corpse bobbing in the ocean. Soon, police are pulling multiple bodies out of the water. Who’s dead, and how did they die? We don’t get to know that yet, of course: We then flash back to a week earlier with the guests arriving in Sicily by boat: Daphne and her chiseled husband Cameron (Theo James), joined by another couple, Harper (Aubrey Plaza) and Ethan (Will Sharpe); Dominic (Michael Imperioli), a film producer traveling with his elderly dad Bert (F. Murray Abraham) and son Albie (Adam DiMarco); and, yes, Season 1’s Tanya (Jennifer Coolidge), who brings along a metric ton of luggage and a young assistant, Portia (Haley Lu Richardson). 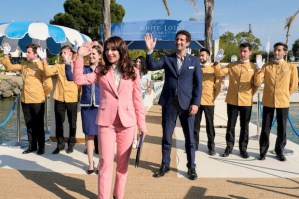 Harper seems standoffish right away: She won’t drink the complimentary Prosecco when they arrive, and she doesn’t want to connect their room with the other couple’s, either. (She gripes to Ethan that Cameron — who Ethan knows from college — only wants to be friends with them because they’re rich now.) Bert flirts with every young woman he sees as Dominic explains they’re there to trace their family’s Italian roots. Plus, a pair of Sicilian locals — call girl Lucia (Simona Tabasco) and her pal Mia (Beatrice Granno) — watch the boat arrive, since one of Lucia’s clients is on it. (Hmmm.) Tanya’s now-husband (!) Greg (Jon Gries) has already arrived, but he seems grumpy and doesn’t want Portia around. So Tanya orders her to “get lost” but also “stay close” (?) before suggesting she just stay in her hotel room for the whole trip. Fun!

Hotel manager Valentina (Sabrina Impacciatore) has her hands full making sure her staff meets her exacting standards — and making sure Lucia and Mia don’t sneak into the hotel. (She chases them out, with Lucia cursing at her as she leaves.) Dominic makes a call to his ex-wife to check in, but she just screams at him to leave her alone, so there’s clearly a wound that’s still raw there. Portia calls a friend in tears to complain about her crappy job; she was hoping “to get thrown around by some hot Italian guy” while she’s there. Albie takes an interest in her, though, and they seem to hit it off as they help Bert up after he takes a spill. Meanwhile, Harper and Ethan share a supremely awkward breakfast with Cameron and Daphne: When Harper says she works in employment law, Cameron sniffs that her entire field of expertise is “a waste of money,” and he and Daphne seem oblivious to Harper’s concerns about the state of the world. The news is too depressing to watch, Daphne chirps: “I do a lot of Dateline.” 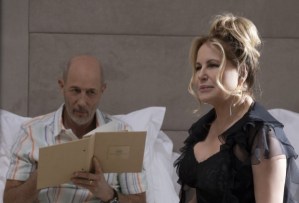 Tanya’s vacation isn’t going much more smoothly: When she tries to seduce Greg, he seems put out by the idea of having sex with her, and when they do the deed, she shoves him off of her in a screaming blackout, leaving him annoyed and unsatisfied. Things between Harper and Cameron get more awkward when he goes up to her hotel room to get a swimsuit, telling her how he hopes they can be friends… and then changing right in front of her, with Harper getting an eyeful of his, um, attributes. At dinner that night, Bert extolls the virtues of flirting and the health benefits of daily self-pleasure, while Tanya chases Portia back to her room so Greg won’t see her. Cameron teases Ethan for being a nerdy workaholic — and also points out a dolled-up Lucia and Mia, who snuck past Valentina, as “hookers.” He’s not the only one: Mia has a drink with the piano player and tells him she’s an aspiring singer, but when he tries to pay her for sex, she throws a drink in his face and storms off.

After dinner, Portia stalks Albie’s Instagram while Cameron calls Harper “a dud” before mounting and tickling Daphne on the bed, with Harper and Ethan forced to hear her giggles through the wall. Plus, Tanya overhears Greg whispering to someone on the phone. (Hmmm.) Finally, Lucia makes her way upstairs to meet her mystery client: Yep, it’s Dominic. (He slid into her DMs a while back.) They make small talk — she confesses she dreams of going to Los Angeles, where he’s from, but she can’t afford it — but soon the talk turns to action, with Lucia straddling him and untying her dress as we fade to black.

How are you enjoying your trip so far? Give the White Lotus premiere a grade in our poll, and hit the comments to share your thoughts.