Survivor‘s Baka tribe may have entered the pre-merge with a numbers advantage, but that didn’t mean the battle between Elie and Gabler was over. Not by a long shot.

With just six players vulnerable to the vote, Gabler saw an opportunity to sink Elie’s game by sharing information that she had gone through his bag a few days prior. After refusing to pin the blame on her ally and island BFF Jeanine, Elie sought to mend fences with her original Baka members, but neither Sami nor Gabler had any interest in keeping her around. The clinical psychologist from Utah was voted out of the game with seven votes placed on her name. (Read a full recap here.)

Below, Elie talks to TVLine about the “messy” dynamics of Baka, her one regret on the island and, of course, how the consequences of bag-gate destroyed her game.

TVLINE | Besides what we saw, what else may have contributed to your downfall last night?
ELIE SCOTT | I think something that wasn’t shown in terms of my personal experience was the amount of trust that I had. There was maybe a perception of overconfidence when really what was going on for me was that I was just very deeply trusting in my alliances. I don’t think my relationships with Sami and Owen were shown as much. I think you saw a lot of what contributed to my downfall, and I feel very responsible for how it ended. But maybe the one thing that wasn’t shown that contributed would have been just the willingness that I had to trust, and in a sense, blindly trust which was not good gameplay. 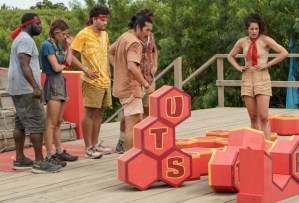 TVLINE | Your own tribemate Sami was saying, “Elie has to go tonight!”
I put my foot in my mouth a lot and I’m very open. I had a hard time keeping things to myself which is important in Survivor. It’s a game of being able to keep secrets and hold information long enough, and use it strategically. I had a serious problem with getting information and then being like, “I have to tell my friends!” [Laughs] It was a chronic problem for me and that I think was really highlighted in the show. It would be like, “OK, Elie gets more information, Elie tells Sami, Sami tells Gabler, Gabler’s upset but strategically holds onto it until he can actually use it. I can’t fault him for that.

TVLINE | In the episode you said, “I feel like I was made for Survivor” and that you were “way better” than you ever thought you’d be socially. Did you ever question the fact that you felt comfortable?
Oh, totally! You know as a fan not to ever say that you’re confident. At the time that I said those things, there were different circumstances going on, I think is what I can say to that. I also will say that I underestimate myself a lot, typically, and so a lot of that was reflection of, “Wow, I really thought that I was going to struggle with this component, and it hasn’t gone as badly as I thought.” I was trying to — and I think this conflicted with the game that I should have played, which is to play under the radar — but my… I guess personal growth that I wanted for myself out there was to become more confident and to become a person that I felt proud of. And so, you would hear very genuine confessionals of me being like, “Wow, I did it and I didn’t think I could. I’m proud of myself,” because I was actively, just for myself, trying to work on how negative some of my thinking patterns can be. 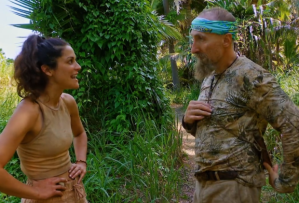 TVLINE | Was there anything between you and Gabler that we didn’t see on TV that led to the destruction of that relationship, and why couldn’t that dynamic be fixed?
He said it well in one of his confessionals that we both have very strong personalities. We may have been the two most alpha people on our tribe and at the beginning we were really aligned. Then there was a shift after Morriah’s vote. He was not feeling well and that impacted his ability to contribute to camp, which I think was maybe frustrating to the tribe, as we’re trying to get our shelter finished. The conversations about getting him out were aligned with that idea of tribe strength. If this is a struggle and the four of us are contributing to camp, but he’s having a hard time right now, then he might need to be the next one to go. But then there was the issue of his idol.

I think once he found out that I had been going behind his back, that’s probably where the tension amped up and I didn’t really understand why. Because I didn’t know until the merge episode that he was aware of that and so that kind of explained things to me was like, “Oh, that’s why we’ve been fighting so much.” He was mad at me and understandably so. But I just had no idea, so it’s kind of like having a relationship with somebody who knows that you’ve done them wrong, but you don’t know that they know.

TVLINE | He seemed a bit entitled though, especially in terms of you not sharing information with him. It’s Survivor! Information should be kept private!
Right, which I didn’t do well, but in that case, I guess I did. I think the root of his frustration was the bag search, which ended up getting pinned on me, even though it was a group effort. Even deeper than that was the awful conversation that we had where I’m like, “So your idol’s dead now, right?” when he knew that I had looked through his bag. I think that that was really the nail in the coffin for us. The other stuff was just kind of piled on. I think that he knows better than to believe I should’ve told him about Jeanine’s idol. I think he was probably upset about this thing that he’d been holding in for almost 10 days at that point. And so it was just like. “…and you did this wrong and you did that wrong!”

TVLINE | Owen and Sami totally screwed you, too, by telling Gabler about the bag search. So when you were going into Tribal, how much did you trust the OG Baka or did you know you were going home that night?
I had so much trust! I mean, a ridiculous amount of trust! You see me saying, “Why would I ever trust Gabler again?” and 10 minutes later I’m like, “Gabler, I trust you! We’re in it to the end!” It’s so sickening to watch it, and honestly, I think the edit was kind to me in terms of that being up in the air. I’m very quick to mend a relationship and move forward, so in that moment, I’m like, “Perfect!” Before the other tribes got to our beach, we kept saying, “Keep the five alive!” I really believed in our ability to at least make it past the merge, and then we could’ve cut each other’s throats at that point. 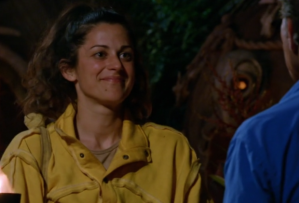 TVLINE | Were you expecting Jeanine to hand her idol over?
We had a conversation about what it would take for her to play it and I really think that if I had told her that I felt [vulnerable] while at Tribal Council, she would have played it. I did wave her off like a little secret signal to tell her that I thought we were good. And a lot of that was a contribution of Gabler and Sami’s discussion at Tribal Council. A lot of times people feel like Tribal is just a little show and everybody’s not saying anything, but I was picking up a lot of information from Gabler and Sami, and I think they did it very well in reinforcing that if you play an idol or advantage when you don’t need to, it could send the wrong signal to people you’re trying to get trust with. So I’m like, “Alright, we just solidified that we’re going to try to stick together. We’re going to mend these relationships.” Gabler had said something at Tribal about wanting to go back and mend relationships. And so I’m like, “OK, they’re talking about Baka” and I didn’t want to have Jeanine play her idol and then end up in a worse condition than I was already in.

TVLINE | If you could go back and change anything about your game, what would it be?
I would have changed my relationship with Gabler. I would have gone with my gut, which originally was to just simply ask Gabler about his idol and say, “Hey, did your idol still work? I can’t remember what the instructions said.” We had a good relationship at that point. I think that Owen and I, at that point, were his strongest allies. I think I could have just asked him and it would have been over. It probably wouldn’t have even made television. But there was a lot of group conferencing on what to do and how to do it, and I think that’s where it got messy. So the one thing I would change would be trusting my gut.

TVLINE | Wrapping up, was there anything else not shown in the TV edit that you think should have made the cut?
Honestly, I think the biggest thing is just how much fun we had. We really did have a lot of fun on Baka. We were a lot of personalities, but we weren’t fighting as much as it might seem. Before and after challenges, we picked each other up and motivated each other. Each night as the sun was going down, we supported each other and talked about our real lives and were genuine. It makes sense that that wouldn’t be the focus of the show because it wasn’t strategic, but we were genuinely there for each other, talking about family and feeding each other every night. We threw a Baka prom for Gabler’s daughter. We genuinely cared about each other which probably made the betrayals hurt more for Gabler knowing how much we had bonded.