Dahmer – Monster: The Jeffrey Dahmer Story topped Nielsen’s U.S. ranking of streaming originals for a second straight week, and with an 18 percent larger tally than its chart debut.

Netflix’s Dahmer for the week of Sept. 26 amassed nearly 4.4 billion minutes viewed across its 10 episodes — aka the seventh-best weekly performance ever in the Nielsen streaming chart’s history. 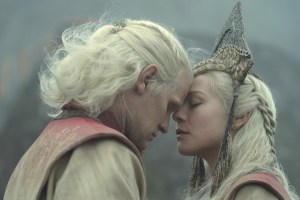 Meanwhile on Nielsen’s separate ranking of all streaming fare…. House of the Dragon (which streams on HBO Max) slipped a spot this week to No. 4 — trailing Dahmer, Disney+’s movie sequel Hocus Pocus 2 (2.7 billion minutes viewed) and fantasy rival The Rings of Power — with 907 million minutes viewed across seven available episodes. But as always, factoring in HotD‘s linear minutes viewed on HBO proper surely would close if not eliminate that gap.