Tell Me Lies is a viscerally frustrating yet undeniably intoxicating watch.

Based on the book by Carola Lovering, the Hulu series centers on the toxic relationship between Lucy Albright (played by Grace Van Patten) and Stephen DeMarco (Jackson White) over the course of eight tumultuous years. As the pair fell into an addictive entanglement, their friends soon found themselves caught up in their harmful lies and manipulative tactics.

Things came to a head in Wednesday’s Season 1 finale, which saw Stephen, in 2008, leave the annual Hawaii-themed college party with his ex-girlfriend Diana, effectively breaking up with Lucy without even telling her. Meanwhile, in 2015, Stephen showed up to Bree’s engagement party with Lucy’s childhood friend Lydia as his date. Oh, and he nonchalantly revealed that Lydia was his fiancée.

Series creator and showrunner Meaghan Oppenheimer, who wrote the finale, always knew she would end the season that way because that’s how she pitched the series. “I just wanted something crazy to end with,” Oppenheimer tells TVLine. And when it came down to it, Lydia was the most “bewildering, shocking person he could show up with.” Ironically, the season-ending cliffhanger also happened to be the first scene they shot. 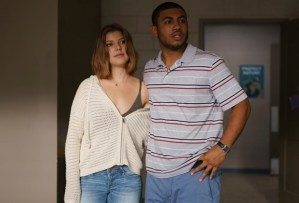 “All of the stuff in the engagement party [was] the first day,” she shares. “That was Jackson and Grace’s first scene together, him bringing Lydia up.”

Read on for the rest of our interview with the Tell Me Lies boss — including where a possible Season 2 might go. (Hulu has not yet officially renewed the series.)

TVLINE | Lucy and Stephen have this twisted relationship. In the beginning, you think Lucy is a person who’s just making mistakes. But by the end, she’s almost as manipulative as Stephen. Talk to me about her journey this season, and where we end up with her in the finale.
It’s really been interesting seeing the audience response to Lucy, and seeing how people have been almost as angry at her as they are with Stephen. I don’t think that Lucy is as naturally manipulative as Stephen, but I think that what happens when you’re in a relationship like this is the behavior starts to seep over and you start to give what you’re getting. You start to learn the survival tools that the other person is using.

She’s being so manipulated by Stephen and so gaslit that she doesn’t always realize what she’s doing is wrong. She thinks she’s doing something s–tty, but for the right reason because she’s completely blind about this guy. She definitely is very flawed and makes a lot of mistakes. It was a little scary to do that because there’s always the fear of the character not being likable enough, especially with female characters. I think that’s something that people can be very hard on. But we were just like, “F—k it.” If we were 18 and dating a complete psychopathic narcissist, we would probably act really badly, too.

TVLINE | Watching Lucy make these mistakes, I also tried to check my internalized misogyny while judging her actions. Do you think that’s also important for viewers who may be critical of Lucy to think about?
Lucy does do a lot of really bad stuff, and she is very harmful. She’s very hurtful to other people. But Stephen, in my eyes, is just undeniably worse, and there have been so many comments of people saying she’s just as bad as Stephen. I do think we have to ask ourselves why we might be even more upset by her behavior. Is it that we expect women to not be as bad as men in relationships? Is it that we feel more betrayed when we see a woman acting that way? I think it’s interesting. I think it’s something to think about.

TVLINE | One of the most frustrating parts of reading the book was that he was never really held accountable for his actions. Was that something you thought about while creating the show?
In the book, he isn’t ever held accountable, and I think it’s still an open question as to whether he’ll ever be held accountable in the show. When we see him in 2015 at the engagement party, it’s very clear he never got in trouble [for Macy’s death]. Lucy certainly doesn’t know yet that he was actually the one driving. And I think that it just depends how it plays out. But people do really bad things and they get away with it. That happens more often than we probably want to admit, and that might be what happens with him.

TVLINE | Is there a plan for Season 2?
We always wrote Season 1 wanting to leave it open for Season 2 because there’s so much [left]. The last time we saw [Lucy and Stephen] together in college was the end of Lucy’s freshman year when he comes down the stairs with Diana, but that’s not the last time they saw each other before the engagement party. There are many more breakups and getting back together and breaking up again that have happened in the meantime. I think it would be really fun to explore all that.

TVLINE | Let’s talk about Stephen and Diana’s shocking exit during the Hawaii party, and using “Mr. Brightside” by The Killers for their big moment. Was that the song you always envisioned for that scene?
I wanted to use that song in an earlier episode. Hulu was very great about letting me choose most of the music, and it was the one time they were like, “We love this song, but it doesn’t work here. Save it for a better emotional payoff.”

When we were editing the scene in the finale, we initially had sadder music, and it just wasn’t working. I was like, “Oh, it’s feeling really melodramatic.” It felt silly, it felt over-the-top. And then I was like, “Will you just put ‘Mr. Brightside’ on and just see how that plays?” We ended up putting it in, and it just gave the scene a biting, nasty humor that had been missing with the other music. It’s so crazy, him walking down the stairs, and if you play it too somber, it becomes a completely different scene. I love Lucy, and I want her to grow and be better, and I want her to get over this guy. But I’m also like, “Babe, you were really nasty to Diana.” The irony of the music really worked.

TVLINE | Now that Stephen betrayed Lucy, do you think she’s going to retaliate?
I think there will be some revenge plots in Season 2. I don’t think that she can tell people about him being in the car because he made it so clear to her that if she were to tell that, she also have to admit all these other things, and I don’t think she’s at a place where she’s willing to risk that social annihilation and admit how badly she behaved, especially now that she’s seen that it wasn’t even worth it. Like, “I did all these things. I covered up for this guy. I lied and I hurt other people for someone who just walked out of a party with his ex-girlfriend.” It’s almost too humiliating for her, and she’s too guilty herself. 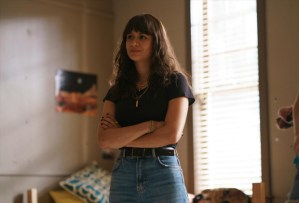 TVLINE | She does end up in bed with Evan. Walk me through this choice.
That was another thing that I had put in there when I pitched the show. I just wanted to blow s—t up. I love the drama. I was like, “What is the crazy thing that could happen? Who were you not expecting to be terrible this moment?” Evan was so good all season, and no one’s that good all the time. I hope people aren’t too heartbroken because I do love Evan. I think he’s just such a good character, and I thought [Branden Cook] did such a great job with him.

TVLINE | I felt bad for Wrigley. He’s clearly still struggling, and Evan insinuated that his brother Drew isn’t around anymore. Is that something you’re going to explore further?
We will definitely find out what happens to Drew. The end of his story is not the end of Season 1. There will be more that happens with him that ends up being why Evan says [what he says], why you realize that he’s no longer in the picture. More happens for that to be the case that we will explore if we get a Season 2.

And with Wrigley, I always felt so much empathy for him because I don’t think he’s a bad guy at all. I think he’s a dummy sometimes. He makes silly decisions, but a lot of them are based on the environment that he’s in. I think that world of macho male athletes is just a toxic environment, and he’s a product of that. But he has a good heart, and he does really care about Pippa. We will explore his downfall and everything, for sure.

TVLINE | We love the drama, but also, how are they all still friends in the future?
There will have to be a period of time when Lucy gets her s—t together and earns her friendships back to a degree. She and Pippa are not good in the future. There’s obviously a lot of tension between them, and we will come to learn why that is if we get a Season 2. But also, that’s the funny thing about some of these college or high school relationships. You end up cementing these very deep connections with people that, if you had met them later in your life when you were more mature and more developed as a human, you might not have become friends with them. Also, I think trauma bonding is a real thing, and these characters have gone through a lot of trauma together by the point that we meet them as adults.

TVLINE | Is there anything else you would love to explore in Season 2 if given the chance?
I want to see a new love interest for Lucy: a new, complicated, messy thing to go alongside her never-ending thing with Stephen. Also, I hope to see a lot more of the ensemble characters. A lot more Bree, a lot more of Evan, a lot more of Pippa and Wrigley.

What did you think of the Tell Me Lies Season 1 finale? Grade the episode below, and then sound off in the comments.