Warning: This post contains spoilers for Tuesday’s finale of The Patient.

Our time with The Patient has ended… and so, too, has Dr. Alan Strauss’ time on this earth.

Hulu’s gripping psychological drama wrapped up its 10-episode run on Tuesday with a supersized finale (double the length of earlier episodes), which saw an increasingly desperate Alan — after Sam decided to keep him chained up in the basement for years — hold a shiv to the throat of Sam’s mother Candace, threatening to kill her if Sam didn’t turn himself in. In the ensuing struggle, Sam strangled Alan to death, but Sam later chained himself up in the basement to keep himself from killing again. He also mailed Alan’s final letter to his children Shoshana and Ezra, with a grieving Ezra turning to therapy himself to work his way through the unspeakable loss.

The finale gave us a lot to unpack, so we turned to series creators Joel Fields and Joe Weisberg (who crafted a similarly tense drama with FX’s The Americans) to help us process our feelings. Read on to get their take on the downbeat ending — and, though The Patient was billed as a limited series, whether they’re having any thoughts about a possible Season 2.

TVLINE | Sam ends up strangling Alan to death. It’s a grim ending, to be sure, but could this story have ended any other way, really? Or was this sort of tragically inevitable?
FIELDS | Well, I think if we told it right, then it was inevitable. [Laughs] We have a dear friend, Josh Brand, who we worked with for many years on The Americans, and he used to say, “When your story is working well, your ending is inevitable.” And I think that really was true here. This seemed like what it had to be.

TVLINE | We don’t actually see the struggle that led to Alan’s death, though. You cut away to this dream sequence where Alan is back with his family, and it seems like a happy ending. And then we cut back when Alan is already dead. So was that a way to soften the blow?
WEISBERG | Well, I think it was the opposite, in our minds, as a way to make it more grim.

WEISBERG | Well, yeah, but the emotion is grim. [Laughs] Yeah, we wanted to really have it hit, and creating a temporary illusion that he got out, and then having it be that you were just in his dying thoughts, felt to us more impactful, more painful. 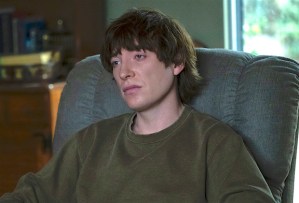 TVLINE | After killing Alan, Sam hears his voice telling him that he will do it again, and so he decides to chain himself up in the basement and gives his mother the key. So in an ironic twist, did Alan’s therapy actually kind of get through to him, only too late?
FIELDS | Well, that’s a good question to ask.

WEISBERG | Yeah, we try to dodge those a little bit because some audience members get there, some will get somewhere else, so we don’t want to step on their freedom.

FIELDS | And in fact, the truth is for us, it’s not even a dodge. We don’t have the answer to that, really, any more than anybody else does. We wrote up to the ending that you saw, and then the rest, really, is speculation. And our speculation is not really different than anybody else’s, unless we choose to write a sequel, which seems like it’d be a very brief sequel.

TVLINE | Well, I was going to ask: Is a Season 2 even a distant possibility? Do you have any desire to follow where a chained-up Sam would go from here?
WEISBERG | It’s been a fruitful source of many jokes. Really, we had a hundred good jokes about what Season 2 could be, but not a single serious discussion.

FIELDS | I think it’d be good for Hulu to have a “My Stuff,” you know, that little thing you “save this for later”? There should be one for Sam. Like, this is what Sam’s watching. He really likes What We Do in the Shadows.

TVLINE | Well, sure, who doesn’t? But do you have any sort of inkling about where Sam would go from here? Can he be rehabilitated?
FIELDS | Well, again, I think this is a question about story that takes place after we’re done writing, and really, those are the questions we’re excited and enthusiastic for everybody to be discussing afterwards.

WEISBERG | I think that last scene of him shackling himself is us asking that question. 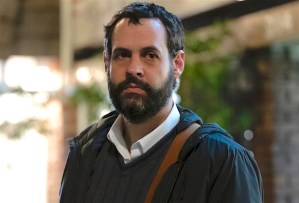 TVLINE | Ezra is very moved by his father’s final note to him, and he ends up in therapy, which serves as a nod to his late father. Why did you decide to end the series on Ezra in therapy, and how does that tie into what the show was saying about the value of therapy in general?
WEISBERG | One of the initial things that attracted us to this was we’ve both spent a lot of years in therapy. We’ve both been helped by it. We’ve both been changed by it. And we thought it’d be dramatically powerful to show, rather than a character just in therapy, which Sam sort of is, but show a therapist as someone who really has a lot of control of these tools and can use them a lot. It’s not exactly a superpower, but it is a set of abilities and skills that you can acquire. But they also have limitations, and also, they don’t make you a superhero. You still are human. You still have problems. You still have blind spots. So what happens when somebody with an above-average set of tools has to confront their blind spots in a very desperate and ultimately time-limited situation? I think that was the draw to us. And I think as you can hear from hearing me talk about it, it’s fundamentally all extremely pro-therapy. It really carries the message that this can be very helpful in life… even if it won’t get you out of the basement.

FIELDS | Nothing gets you out of the basement, as we all learned for the last two and a half years, sometimes. Sometimes the world chains you up. And the question is: How do you face that? And to answer your question: Why end with Ezra? It’s for all their differences, he was finding the value in his relationship with his father there, and pursuing an attempt at understanding. 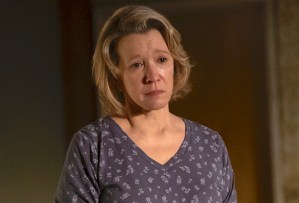 TVLINE | Sam’s mother Candace was a real piece of work. She definitely was enabling her son to commit murder, but she also was insisting that she’s not a monster. So how did you walk that line with her between being a horrible mother and a relatable human being?
FIELDS | Well, you hire a fantastic actress [in Linda Emond]. And then we always tried to think about how she would genuinely feel, and what her struggles would be. While we, from the outside of the story, morally, would want her to immediately call the police or would have called the police a long time ago, it’s not so hard to imagine why a mother would want to not see your child locked up and would want to tell herself that this is the time that it’s going to be different and to try to protect her son. It’s the most primal thing in the world.

TVLINE | I do have to ask: How did Sam evade the authorities for so long? He doesn’t seem particularly careful. How did you reason that out in the writing process?
FIELDS | Well, we did some research, but basically, if you look at the story as it’s laid out, he’s never been arrested for anything. So there’s nothing in the system about him. And although he’s not picking people at random, he’s picking random people, actually, psychologically, so there’s nothing, really, to tie him to these crimes. And also, he lives in Nowheresville, USA, which is, as we know, a place where the police have a tough time getting an effective task force together. 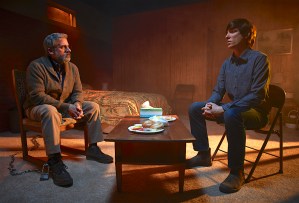 TVLINE | So much of this is a two-hander between Steve Carell and Domhnall Gleeson. What did those two bring to those scenes as actors, and were there some parts of their sessions together that we didn’t see?
WEISBERG | You mean stuff that we filmed and cut?

FIELDS | I would say there’s a third category, too, which is scenes we imagined in our minds but never bothered to write down because there’s only so much you can see. But yes, yes to all of it.

WEISBERG | It was amazing, watching the two of them work. We weren’t on set all the time by any means, but we certainly were there enough to experience the energy and the feeling. I don’t exactly know how to describe it, because they’re both very intense, and we were obviously putting them in a very intense situation. And they’re also both lovely and clearly liked each other and clearly took to each other right away. So I think you got to see the fruits of [that]. What amazes me about actors is the way they completely depend on their scene partner. You can’t go in and do your part well if your partner isn’t doing well, too. That doesn’t work. It doesn’t create a scene, or truth. So they’re totally dependent on each other, and to watch two people in this crazy situation go in and give what needs to be given, and the kind of talent to get what needed to be given, so that they could create this illusion over and over and over again… I will say that when we wrote this, we were nervous about if it will work. It seemed like it was such a thin filament separating it working and the audience not suspending disbelief. We also knew that was going to just depend on the actors. So when we saw them together, and we were like [gasps] just totally in it, it was an enormous relief. But really, it’s a testament to them, because this one could have gone the other way.

Give The Patient‘s finale — and the series as a whole — a grade in our polls, and then hit the comments to share your thoughts.