This week on NBC’s La Brea, Gavin’s mom dropped a bombshell on Josh, while Paara let slip with a secret-within-a-secret of her own.

Undeterred by a run-in with escaped prisoner Virgil (who warned of an  increased number of guards), Gavin, Eve, Levi, Sam, Izzy, Lucas and Scott continued their trek to the mine. Looking in from a high ridge, they saw the wagon of black rocks being prepped for transport, and the prisoners who were being readied for transfer to another, nastier mining facility. As such, the group split into two — Gavin, Eve, Izzy and Sam to steal the wagon, and the others to free the prisoners.

Gavin, Eve, Izzy and Sam soon enough tumbled into a booby trap pit filled with softball-sized spiders, and Izzy haaaates spiders. They escaped through a weakened wall into the mine tunnels, where they KO’d a quartet of guards and stole their uniforms. (To do so, Eve had to leave her cozy shearling coat in the tunnels. Will she ever get it back?? Discuss!)  Returning outside, they boarded and pretty improbably drove the black rock wagon past lead guard Taamet, who was apparently unfazed by Eve and Izzy’s piercing blue eyes and grime-free complexions. But just as the wagon pulled away, the KO’d guards alerted Taamet, and a chase ensued. Gavin & Co. parked the wagon and hid, then tried to get the jump on Taamet and several other guards. And while the good guys put up a decent fight, the guards gained the upper hand — until Levi, having fetched Paara and her people, arrived with backup. 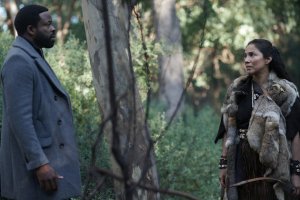 Ty and Paara chased after Taamet, but Paara refrained from putting an arrow in him from afar, after she saw his face and realized he was her “dead” husband. (tl;dr Taamet years ago led a rebellion at the fort, and was ostracized with his cohorts.)

Elsewhere: With Levi away seeking help, Lucas and Scott worked together to free the prisoners by distracting the guards and then setting fire to the raft that was going to be used for transport.

While Ty and Paara returned to the village to brace for Taamet’s retaliation, Gavin, Eve, Sam, Izzy, Scott and Lucas proceeded with the wagon toward the Lazarus building, which apparently just suddenly “appeared” a few hundred yards in front of them, and didn’t, you know, peek over some tree tops from a further distance away. 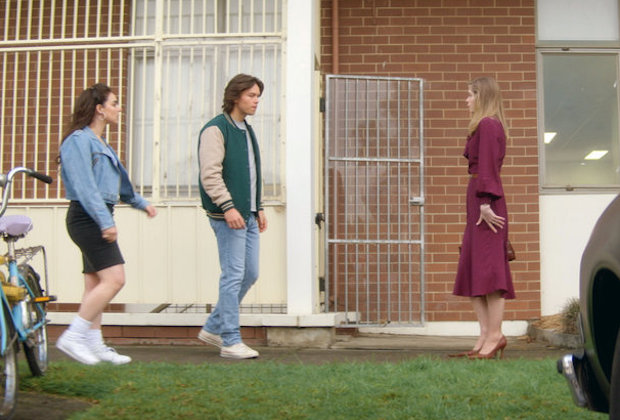 Questioned about her being in the year 1988, Dr. Clark aka Caroline aka “Grandma?” explained to Josh and Riley that Gavin/Isaiah is not originally from 10,000 B.C. but in fact the future (meaning well beyond 2022, we assume. She annoyingly didn’t specify a year). In said future, Caroline was a scientist “trying to save our world” with a trip to 10,000 B.C., she explained, “but we ended up doing more harm than good.” She then traveled to 1988, the ostensible birthplace of time travel theory, to fix the “mistakes” that led to the sinkholes and the imminent tidal wave.

When Caroline expresses an interest in checking on her wee son, Josh urges her not to, that she must let his adoption play out or Isaiah won’t grow up to be Gavin Harris, and Josh thus will cease to exist. Caroline appears to agree and arranges to meet with the duo later at the university, to discuss thwarting the tidal wave. But when she is a no-show, they find her at Child Protective Services, talking to Isaiah… though not to claim him as her own and disrupt the timeline, but to introduce the tyke to some colleagues, the Harris family, who have been wanting to adopt a child. (A puzzled Isaiah tells Caroline he can’t remember anything earlier than a few days ago, yet senses he knows her; she affirms as much, but explains that she herself cannot adopt him.) Later, Josh assures Grams that she did the right thing, vouching for Mr. and Mrs. Harris as parents/grandparents.

What did you think of the episode “The Heist”?