Monday’s episode of The Voice ushered onto the Battles field 12 contestants — but only eight walked back off stage still in the running to win Season 22 of NBC’s long-running sing-off. Who managed to earn themselves a ticket to the Knockouts, and who wound up with a ticket… home? Keep reading, and we’ll go over all of the evening’s Battles.

Team Gwen: Kique (Grade: C+) defeated Tanner Howe (Grade: C) on “Don’t You (Forget About Me)” | After Gwen advised the duo not to deviate too much from Simple Minds’ memorable melody — unusual direction from her; she tends to love revamps — Kique and Tanner delivered a performance that was equal parts cheesy and forgettable. If you could call anyone a winner in this pairing, I’d say that it was Kique, if only for the way that he made his voice dip and soar.

Team Blake: Kevin Hawkins (Grade: A) defeated Hillary Torchiana (Grade: B+) on “Preach” | In rehearsal, the teammates went overboard showing off, in Blake’s estimation — especially since they’d be singing John’s song in front of John. In the moment of truth, they were both pretty terrific, reined in and yet still plenty “big” enough to blow the speakers. Tough call, but since he’s the more engaging stage presence (and seems to have better range, too), Kevin was the winner for me.

Team Camila: Devix (Grade: A) defeated Sasha Hurtado (Grade: B) on “Electric Feel” — Sasha stolen by Gwen | The twosome’s rehearsal reminded me mainly of the intensity of Devix’s voice — he should be such a contender. (I’d buy his album.) Though Sasha suffered from nerves, not being familiar with the MGMT hit before Camila assigned it, she left ’em at the door, bringing a real power to the stage. Devix, though… Damn! I dunno if I’ve heard anybody manipulate their voice so brilliantly on the show since Chris Blue 10 seasons ago. 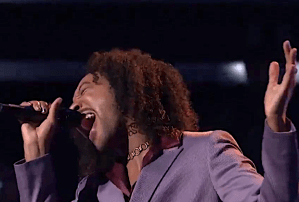 Team Legend: Kim Cruse (Grade: A) defeated David Andrew (Grade: B+) on “Heartbreak Anniversary” | Even in rehearsal, four-chair turn Kim was blowing my mind. I was like, “Good luck, David.” Though “nice” and “pleasant” were the most exciting adjectives that advisor Jazmine Sullivan could affix to his voice, David really brought it on stage, hitting some notes that were so massive, they could only be heard in widescreen. Trouble was, Kim’s just in another realm — insane voice, and she knows how to use it for maximum impact.

Team Blake: Kate Kalvach (Grade: B+) defeated Madison Hughes (Grade: B-) on “Every Rose Has Its Thorn” | There’s something special about Madison’s voice, to be sure; once you’ve heard it, you’re not going to mistake it for anyone else’s (especially not in the lower register that is her happy place). Nonetheless, this Battle belonged to Kate, who demonstrated both a greater range and a greater mastery of her instrument. Plus, she has it in her to sing with a vulnerability that will stay with you long after the performance has ended.

Team Gwen: Alyssa Witrado (Grade: A) defeated Ian Harrison (Grade: A-) on “Happier Than Ever” — Ian stolen by John | Wow — excellent Battle. When it started, Ian served Chris Isaak vibes but seemed likely to get blown off the stage by Gwen soundalike Alyssa. But then Ian got to unleash his roar at full volume, and it was not only thrilling, it was freakin’ good. Overall, Alyssa was more consistent and interesting (even her movements), but the “Holy crap!”-ness of Ian letting loose made this a Battle where I’d’ve been happy whichever of them won.

Your thoughts on Monday’s Battles? Drop ’em in a comment after voting for the night’s standout below.