If all goes according to plan, Netflix’s latest YA adaptation could continue happily ever after for years to come.

Based on the first book in Soman Chainani’s six-part series, The School For Good and Evil follows two best friends — Sophie (Sophia Anne Caruso) and Agatha (Sofia Wylie) — who are whisked away to the titular institution where fairy tale heroes and villains are made. The catch? Whereas Agatha lands comfortably in the School for Good, Sophie is “mistakenly” dropped into the School for Evil.

The School Master (Laurence Fishburne) insists that his institution doesn’t make mistakes, so the besties are left to study under the guidance of Clarissa Dovey (Kerry Washington), the Dean of the School for Good, who gets to do some Olivia Pope-level scene chewing; and Leonora Lesso (Charlize Theron), the Dean of the School for Evil, who apparently shares a barber with Johnny Depp’s Willy Wonka.

Complications arise when Sophie and Agatha meet Tedros (Jamie Flatters), a fairy tale prince with all the trimmings. Anyone with even a passing knowledge of Wicked can predict how this love triangle unfolds: a smitten Sophie makes her interest and availability abundantly clear, but Tedros is far more taken with Agatha, who routinely challenges his princely perception of the world around him.

As the weeks pass, it becomes clear that Sophie and Agatha are exactly where they belong; Agatha discovers she has the power to restore cursed beings to their original form, while Sophie’s dark abilities get the seal of approval from Rafal (Kit Young), the School Master’s presumed-dead evil brother. 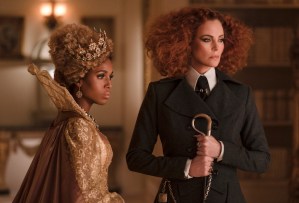 Though Agatha helps Sophie impress Tedros enough to score an invite to the annual Ever Ball, it’s all downhill from there. The schools are plunged into chaos, Sophie and Tedros are punished, and the girls’ friendship is virtually severed. Rafal, who has been disguised as the School Master this whole time (surprise!), takes further advantage of the situation by gifting Sophie with forbidden blood magic.

Then things get really dark, as Rafal convinces Sophie that he’s always been her true love. Their kiss dooms both schools, triggering rivers of blood, canned screams and overall devastation. Or as Rafal puts it, “Welcome to Never After!” Agatha and Tedros show up for the final battle against Rafal, one that ends with Agatha delivering the final blow. And although Sophie nearly succumbs to her injuries, she’s ultimately saved by Agatha’s kiss, “for what is truer than the love between friends?”

With Rafal defeated, the two schools are finally united, allowing Good and Evil to coexist in harmony. Sophie intends to return to Gavaldon alone, but Agatha can’t let her best friend fly solo, so she kisses Tedros goodbye and leaves the school behind.

“And that, you could say, is the end of our story,” Cate Blanchett narrates. Or is it? Before the credits role, we see one of Tedros’ arrows piercing the vortex between worlds with a message: “I need you, Agatha!” Needless to say, though Blanchett still says it, this is “only the beginning” of the story.

It’s hardly surprising that the movie would end this way, as Tedros’ arrows piercing the vortex is a pivotal plot point in Chainani’s second book, A World Without Princes. In the book, however, Tedros’ message asks for Sophie to return to the School, whereas only Agatha’s name is mentioned in the movie.

At this point, it remains anyone’s guess whether Netflix will keep the franchise going. The reviews have not been kind, but plenty of ill-critiqued projects have been trumped by fervent fandoms in the past.

Let’s talk it out: What did you think of The School for Good and Evil? Are you hoping Netflix orders a sequel? Grade the movie below, then drop a comment with your full review.