Sheesh. We won’t get to Season 22’s Live Playoffs on The Voice for a while yet, and already, contestants are getting eliminated quicker than those red chairs can even turn around. Tuesday, five more singers got the chop — including one who we didn’t hear sing so much as a note all evening. Which one? Read on, we’ll discuss.

Team Camila: Eric Who (Grade: C) defeated Sydney Kronmiller (Grade: B+) on “Paparazzi” | Not sure it was the coach’s best choice ever to give this duo the balladized version of the hit for which they were so, ahem, Gaga. It was low-energy, low-interest and mostly just showed off the incredible lower register that made Sydney the obvious choice to move on. Eric, as colorful as his pink hair, was fun to watch, but not fun enough to overcome Sydney’s superior vocal. (Camila thought otherwise.) I’ll be surprised if he makes it past the Knockouts. 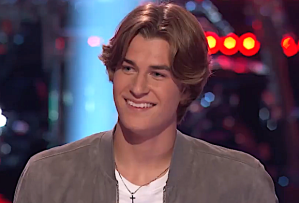 Team Blake: Brayden Lape (Grade: C) defeated Benny Weag (Grade: B) on “Pretty Heart” | Rehearsal made it sound like Benny had a definite edge over the inexperienced 15-year-old. Benny, however, feared that Brayden’s twangier vocal made him the frontrunner. (Probably didn’t help that Blake suggested that Brayden was as good as Taylor Swift at that age, he just didn’t realize it.) On stage, nope, this was all Benny as far as I was concerned. I’m sure Brayden has a bright future in front of him — and like Blake, I loved the lil’ break in his voice — but his older, infinitely more compelling competitor won this Battle hands down. (Blake thought otherwise.)

Team Blake: Eva Ullman (Grade: B) defeated Ansley Burns (Grade: N/A) on “Wildest Dreams” | Looks like poor Ansley might’ve choked completely in her Battle, because we didn’t hear her sing a note in the heavily abbreviated clip. For her part, Eva was better than fine, what little we got of her. But would any of us remember that, or her, a week from now?

Team Legend: Morgan Taylor (Grade: B) defeated SOLsong (Grade: B) on “Die for You” | In this, another shortened Battle, the competitors seemed pretty well-matched. But, citing Morgan’s confidence, John kept her and ditched SOLsong (for which my spelling autocorrect will be forever grateful, I guess).

Team Gwen: Daysia (Grade: C) defeated Julia Aslani (Grade: N/A) on “Home” | In the last of the night’s mini-Battles, we didn’t get to hear Julia sing by herself at all, so I don’t imagine that went terribly well. Daysia has a perfectly pretty voice, and got at least a second in the spotlight, but her over-enunciating made her sound kinda like a robotic GPS singing at us. 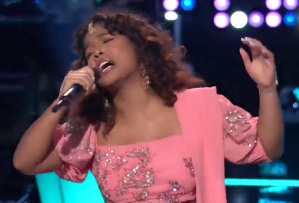 Team Legend: Parijita Bastola (Grade: B+) defeated The Marilynds (Grade: B) on “How Deep Is Your Love?” — The Marilynds saved by John | Didn’t bode well for Parijita when advisor Jazmine Sullivan suggested during rehearsal that the teen would be amazing in a few years when she came into her own. But on stage, though she took more liberties with the Bee Gees’ melody than I would’ve liked, she shone — and, more importantly, distinguished herself as a singular entity. The Marilynds sounded lovely, but after Girl Named Tom, their harmonies didn’t seem nearly so impressive.

Who most impressed you Tuesday evening? Vote in the poll below, then in the comments, name your overall favorite contestant so far.