The following contains spoilers from the She-Hulk finale.

Kat Coiro, who directed Episodes 1-4 and 8-9, told TVLine on Friday morning that there were “conversations” as the mega-meta finale script evolved.

“Marvel is not so much a ‘notes’ place as a ‘conversation,'” she explained, “and a lot of those conversations have to do with where the franchises are headed and what the future is.” 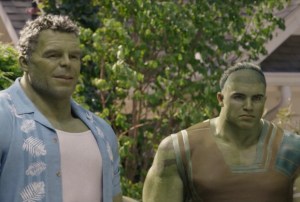 For example, when Hulk (played by Mark Ruffalo) resurfaced at the end to introduce the Walters family to his son (played at least in this instance by Wil Deusner aka DC’s Stargirl‘s Joey Zarick), “I had an idea that I wanted Skaar to be a toddler, like a Baby Yoda kind of character,” Coiro shared, “but I don’t think that’s where the story is headed.”

Coirio says that when it came to Jen Walters (played by Tatiana Maslany) taking K.E.V.I.N. to task for the MCU’s over-reliance on flashy, final fights (as well as “daddy issues” for its heroes), “Hilariously, I was more nervous about throwing Marvel under the bus than Kevin and the big brass at Marvel was. They were incredibly self-deprecating and incredibly willing to poke fun at themselves.” 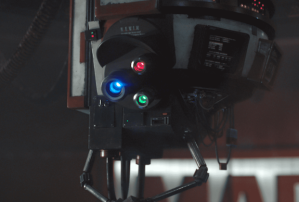 Coiro says that Marvel Studios chief Kevin Feige (the human) “had a huge hand in the finale” and its “fourth wall-smashing” elements, which included She-Hulk fleeing the “mess” of a CGI clash between Hulk, Abomination, Titania and Hulk Todd, climbing around the Disney+ menu screen and then strolling across the (actual) Disney lot to grumble to the TV series’ writers. She-Hulk/Jen then confronted the aforementioned K.E.V.I.N. inside the (actual) Marvel offices and requested a series of changes to the finale.

Feige “definitely always wanted to make sure there was a separation between the real Kevin Feige and the K.E.V.I.N.,” Coiro says. But after a bit of negotiation, “he did let us put the little ‘baseball cap’ on the robot,” like Feige himself famously wears, “so that was good.”