Disney+’s She-Hulk: Attorney at Law kicked off its season finale with a cold open that uncannily recreated the opening credits for TV’s The Incredible Hulk, which ran for five seasons on CBS and starred Bill Bixby and Lou Ferrigno.

Part of the reason the homage was so retro-perfect was because actual elements from the original series were incorporated into the filmmaking process.

Speaking with TVLine on Friday, Kat Coiro, who directed the finale (as well as Episodes 1-4 and 8), said, “There were a couple of background plates that we ended up licensing” from the late-1970s/early-’80s Universal Television/Marvel Comics co-production, “but we shot our own original version of everything.”

She-Hulk head writer Jessica Gao told TVLine that the spot-on Incredible Hulk homage was one of her two favorite things about the finale (the other being us meeting K.E.V.I.N.).

“I can’t believe we got to do it, and it was so wonderfully done,” Gao effused. “Our second unit director, Mo[nique] Ganderton, directed most of that, if not all of it, and it just looks so great. The editors did such a good job in making it feel exactly right.” 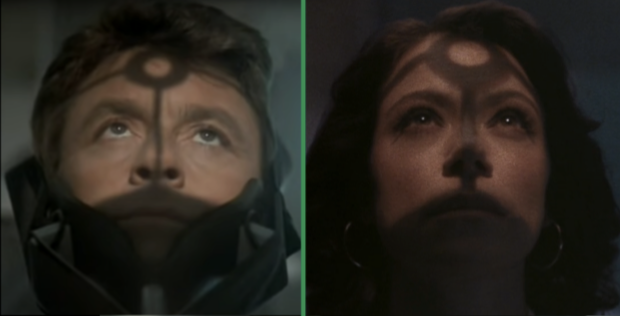 In the homage, She-Hulk star Tatiana Maslany essentially played the Bill Bixby role — gamma radiation chair, glowing green eyes and everything — while one of Maslany’s Hulk stand-ins, Devon Lewis, picked up where Lou Ferrigno left off.

MCU vet Mark Ruffalo, meanwhile, pops up in a cutaway that evokes the infamous “You wouldn’t like me when I’m angry” face-off between Bixby’s Dr. David Banner and Jack Colvin’s intrepid reporter, Jack McGee.

“Oh my God, I loved it,” Maslany told TVLine this afternoon. “It was such a fun sequence to play, and of course when you’re pulling from something directly, you can lean into that style in such a way.

“Mark [Ruffalo] and I really had fun with that, it was really special,” Maslany added. “Again, it really lives in that world of how meta this [She-Hulk] world is.”