This week on CBS’ Fire Country, Jake held Bode’s fate in his hands, depending on whether he told Vince about getting slugged by his ex’s brother or not. But it was another secret that wound up deciding if Bode would get booted from his hometown.

Episode 2 opened with a flashback to when Riley was alive, and a birthday celebration at the bar. In thanking all those in attendance — Vince, Sharon, Eve, Jake and Bode — Riley very conveniently connected any last dots we needed, regarding who is who. (Namely, Sharon and Vince are both her parents, and they are both also Bode’s.) During same party, Bode learned that his sister had begun dating Jake, and that he in short order broke her heart.

Back in the present, it became evident that Vince would be fine with Bode being sent back to prison due to his “rogue” actins during the Buckeye fire. Manny makes clear that it is his call, once he has collected all the facts. Her interest piqued by something Bode said to his father, Sharon asked Vince about an “order” he once gave, but Vince puts her off for the time being.

The “fire event” of the week involved a dry lightning storm, which threatened a rec center (and the rugrats to whom Gabriela was giving swim lessons), and which later nearly zapped the prison bus which Bode convinced Manny to send the kids to safety in. In the course of treating the driver (who had a slab of hot asphalt catapulted through the windshield and onto his chest), Eve grilled Jake about how he broke Riley’s heart; eventually, he confesses that he had cheated on Bode’s sister (Secret No. 1!), and hadn’t made amends before she died in the car crash. Jake also says that Bode punched him during the Buckeye rescue, and if he tells Vince, there is no way Bode isn’t sent back to prison. Eve urges him to withhold that information, if their own family is to rebuild itself.

After the lightning storm passes, the Cal Fire crew gathers at the bar to celebrate. There, Eve takes another crack at asking out Aydan, but the barkeep takes a rain check, suspecting the firefighter is merely on a “just saved a guy’s life” high. 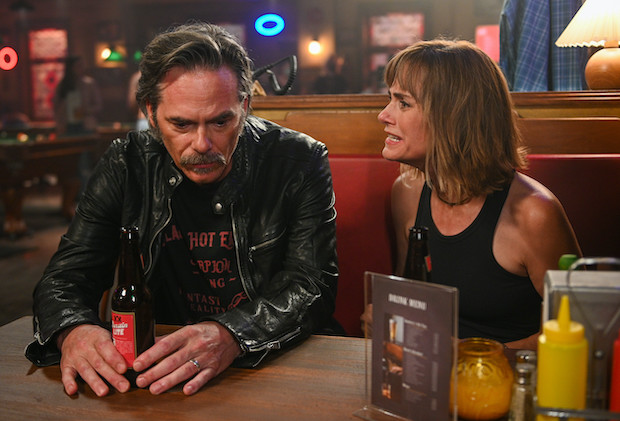 Vince meanwhile tells Sharon that after Riley died, he told Bode to leave town and never come back. An aghast Sharon reminds her husband that she effectively lost two children the day Riley died, because of this “order,” and she will be damned if she will miss out on the chance to reconnect with their son. Vince then says “there is more…,” that he suspects Bode gave Jake the shiner he has been sporting, which would seal their son’s dismissal from the fire camp program.

Sharon checks in on Manny’s decision, and it becomes evident to us that Jake decided not to disclose the punch. Manny is set to transfer Bode to another fire camp, but Sharon reveals to him that she is dying of a chronic kidney disease (Secret No. 2!), and wants Bode near.

Manny later tells Bode that he is keeping him at Three Rock, and when he meets resistance, he argues that no matter where Bode is stationed, his father’s voice will always echo in his head. Manny also reveals that he, too, had been an inmate in the fire camp program (Secret No. 3!), and that it was Sharon who believed in second chances and paved the way for him to join Cal Fire proper. Manny then challenges Bode to stay and prove himself to be the person his mom thinks he can be, and not the deadbeat his dad suspects he is.

What did you think of “The Fresh Prince of Edgewater”?