The “greatest treasure in the known galaxy” is out there, and it’s up to the U.S.S. Discovery crew to claim it.

A new teaser for Star Trek: Discovery was released Saturday in conjunction with the Star Trek Universe panel at New York Comic Con. The one-minute clip (watch it above) delivers the season’s very first footage, alongside the announcement of three new cast members.

Callum Keith Rennie (The Umbrella Academy) joins as Rayner, a “gruff, smart Starfleet Captain who holds a clear line between commander and crew — he leads, they follow.” Continues the character’s official description: “He doesn’t do niceties along the way; his feeling is, you get the job done and apologize later.” And collaboration? Not his strong suit. 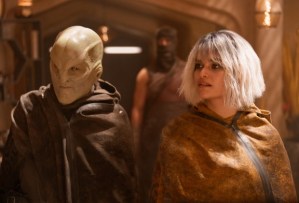 Joining Rennie as series regulars are Eve Harlow (Agents of S.H.I.E.L.D.) and Elias Toufexis (Shadowhunters). Harlow plays Moll, a former courier-turned-outlaw equipped with an impressive strategic mind and a sharp wit. “She goes into every situation with a clear plan and stays focused and clear-headed on her goal, even when things go awry.” And she is not intimidated by Captain Burnham.

Toufexis’ L’ak is “impulsive and fiercely protective” of his partner Moll. He doesn’t care about collateral damage or its consequences when it comes to Moll’s safety, which may prove to be unfortunate for the U.S.S. Discovery crew should conflict arise.

In Season 5, “Captain Burnham and the crew of the U.S.S. Discovery uncover a mystery that sends them on an epic adventure across the galaxy to find an ancient power whose very existence has been deliberately hidden for centuries,” reads the official description. “But there are others on the hunt as well, dangerous foes who are desperate to claim the prize for themselves and will stop at nothing to get it.”

Watch the new teaser by pressing PLAY above, then tell us your thoughts in the comments!