When She-Hulk met Daredevil… things got super-flirty (and then some). But did the closing sequence that Jen herself said felt “tacked on” wind up throwing cold water on the heroes’ rousing team-up?

Ahead of next week’s finale, the episode “Ribbit and Rip It” opened with the introduction of Leap-Frog aka Eugene Patilio, a low-tier hero who asks Jen to represent him in a legal action against the designer of his seemingly malfunctioning supersuit. Given that said defendant would be the one and only Luke Jacobson, Jen had personal and professional conflicts, but her boss insisted she handle the case.

As it quickly became apparent, Leap-Frog’s case had no legs (snicker), seeing as he had wrongly used jet fuel in his boosters, sparking the flame-out. This fact was keenly sniffed out by Luke’s lawyer, one Matt Murdock from New York (played again by Marvel vet Charlie Cox). Afterward, Matt bought Jen a drink at the Legal Ease, where he got her thinking about how she has a unique opportunity to uphold the law as a lawyer… and then seek justice in other ways, as a superpowered hero. Though Jen is unaware of Matt’s own alter ego, the two spark on multiple levels, but their flirtation is cut short by a “business” call for Matt.

No sooner does Jen arrive home, she gets a call from Leap-Frog, who says he is being attacked while driving his car. Jen suits up in her new She-Hulk outfit and meets with Eugene at a parking garage, where she gets to slugging it out with his “attacker” — Daredevil. Each hero gives as good as they get, and some some damage is done to the garage by She-Hulk’s smashy ways, but She-Hulk winds up with the upper hand, at which point she unmasks her opponent to discover it’s Matt.

Matt explains that 1) no, he was not pretending to be blind, and 2) Leap-Frog is holding Luke hostage, forcing him to upgrade his suit. The two make tracks for Leap-Frog’s not-at-all-secret lair, where there is some debate about the attack plan. Daredevil is inclined to take on the goons/henchmen one at a time (hallways are his thing, after all), while She-Hulk is happy to just smash.

After their back-and-forth leads to a certain… intensity… ‘tween them, Daredevil sets out to take down one bunch of baddies, but when a second group comes at him, She-Hulk drops through (and I do mean through) the ceiling to smash them. Then then enter the lair proper and team up against a final flurry of goons, while exchanging legal stratagem along the way. Once their job is done (and Jen has made amends with go-to tailor Luke), Matt and Jen kick back against a billboard. Matt laments that he is heading back to New York in the morning, but rather than wait for his next sojourn to L.A., Jen suggests they just hook-up now. Which they do, back at her place, after some intricate removal of supersuits. 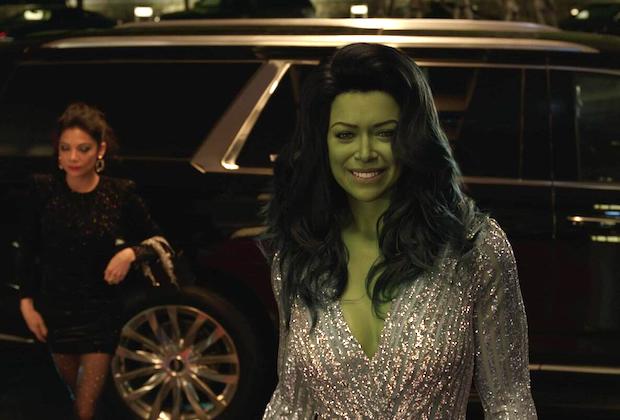 The morning after, as Daredevil does a hilarious, supersuited-yet-barefoot “walk of shame” through the neighborhood, Jen remarks upon Nikki’s arrival for Female Lawyer of the Year gala beautification that the episode sure seemed to have reached a (ahem) satisfying conclusion, so she is puzzled about what is going on now. (What, is a “red” Hulk about to be revealed, she has to wonder.) The action leaps to that evening’s gala, where She-Hulk in her Luke Jacobson original struts the carpet. But when Jen is later called up on stage (along with several other FLOTY “winners”), her speech is interrupted by the Intelligencia’s takeover of the video screen backdrop, where they project anti-She-Hulk rhetoric — including a “slut”-shaming, hidden camera video of Jen’s hook-up with (an unseen) Josh.

Triggered by this vile attack — and against nearby Mallory’s “don’t do it” advisement — She-Hulk lashes out at the video screen and Hulk-smashes it, sending all of the attendees into a panic/evacuation. She then is left to stand there, surrendering herself to the cops, sheepish and rightly mortified.

What did you think of Daredevil’s debut, and that really odd, sad ending to an otherwise bubbly episode? And what are your predictions for the finale?