Have we reached Peak Puzzling on Survivor these days? Is watching a puzzle showdown as exciting as the show believes it is? If every single immunity challenge is decided the same way, I would argue that no, it is not.

Once again, Wednesday’s episode aaaall came down to a puzzle, as Nneka and Jesse failed to secure the immunity idol for their tribe after botching an ol’ fish jigsaw. (I’ve already typed the word “puzzle” so much that I’ve annoyed myself.)

Puzzles (blergh) aside, we saw another Beware Advantage get claimed, a new journey commence for three lucky castaways and learned more about Noelle, Nneka and Jesse’s stories. But enough of my griping! Let’s get to this week’s recap and break down all of the latest haps.

BAKA | Gabler’s starting to deteriorate and the women are noticing. Elie, who was once considering working with him, now wants him gone. Her new plan: Convince him that his idol has expired. But before she can even try to deceive him, Sami tells him that the ladies went through his bag to read the rules of the idol. Gabler is (understandably) not happy about it. He then gives Elie a convincing performance, making her believe that he believes the idol is expired. For now, he’s completely fine to play dumb, but Elie’s gross underestimation here could come back to bite her. 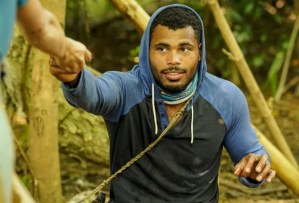 COCO | It’s James’ birthday and he’s antsy to go idol hunting. Despite the fact that suspicions are sky-high, Karla goes looking and finds exactly what everyone’s been searching for: the Beware Advantage. But she didn’t risk her vote the first time, and ultimately, she decides to put it back without opening it.

After a conversation with James, she has a change of heart. You don’t come on Survivor to leave advantages behind! You’ve got to risk it for the biscuit! So she goes back, snatches that thing up and learns all about bead-a-palooza. She easily gets James’ bead, then Geo’s. She trades her earrings for Cassidy and Lindsay’s beads, and ultimately collects Ryan’s, too. Idol acquired! I can almost hear Jeff yelling, “That’s the way you play Survivor!” from the editing bay.

IMMUNITY IS BACK UP FOR GRABS | Players will leap off a tall tower, climb up some crates, then dive down to get a key. The two remaining tribe members will use the keys to unlock puzzle pieces. Finish the puzzle, yada, yada, yada. The tribes are also playing for reward: A Survivor tool kit and a bunch of fruit.

Owen turns into a parkour master blessed with the blood of a dolphin, which gives Baka the early lead. While the rest of the players dive (and dig) deep, Geo checks out the Sandra Sit-Out Bench for an advantage. Nice try, my man, but this time around, he gets nada. (I do love that they worked that into the edit though.)

Baka is first back with all three keys, but all of the tribes are very close together. Elie and Jeanine absolutely destroy the puzzle, and as they celebrate the win for Baka, it’s a straight up showdown between the other two tribes. A showdown that Vesi sadly loses. They’re heading to Tribal, but first, Baka must select three players to go on a journey. They pick Noelle, James and Owen. 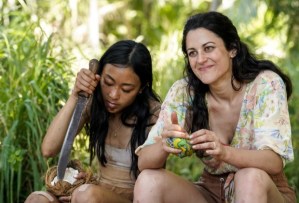 VESI | So maaaybe Nneka shouldn’t be on puzzles anymore? (Just sayin’.) Will two strikes lead to her ousting? We see her break down to Dwight; letting her tribe down is tearing her up inside. For Jesse and Cody, the vote comes down to loyalty (Nneka) or the strength of the tribe (Noelle). Jesse tells us Nneka reminds him of his mom, which pulls at his heartstrings. Plus, he knows that she wants to put the money to good use and help struggling families in her home country.

JOURNEY | Noelle is uneasy about being gone from camp just minutes before Tribal, and she’s right to have that reservation. Nothing she can do about it though. For now, she, James and Owen are hiking up a high mountain to make a tough decision. Noelle spills the beans about last week’s Tribal, hoping the other two will throw her a bone since she was on the bottom of the vote. Her plea works and the guys decide to help her out. They let her be the only player that risks her vote, therefore gifting her with the advantage, which this time around is a Steal-A-Vote.

TRIBAL COUNCIL | Jeff inquires about what went wrong at the challenge, and Nneka takes responsibility. She talks about the heartbreak of the night’s vote, which others attest to. However, there’s still a game to be played.

Despite Noelle promising she didn’t risk her vote, Jesse isn’t sure. She could have anything, he says. Nearly everyone on the tribe is almost positive things will go the way they planned, but Noelle isn’t so sure. (Is that a bluff?) When Jeff reads the votes, Nneka is sent packing and Noelle’s advantage goes unused.

Did the right player go home this time? Let us know in the comments.