When it comes to Chicago Med‘s Dr. Will Halstead, “one thing’s for sure: You can count on Will having money problems and relationship problems,” his portrayer Nick Gehlfuss says.

The doc was recently dealt a monetary blow when the apartment building he owns caught fire, but it’s Will’s often messy and complicated love life, first with Dr. Natalie Manning and now Dr. Hannah Asher, that has plagued the character for several seasons. Despite that, Gehlfuss believes that “Will wants to settle down in a way,” the actor tells TVLine’s Keisha Hatchett during a recent #OneChicago Day press junket. “I think he was ready to be a stepfather to Dr. Manning’s child. And I think he’s ready to commit to someone if that is the case. But I think you have to start out dating no matter what so it’d be interested to find out how he gets to that point of settling down. I think it’s a whole journey.”

Could Will take that journey with his ex-girlfriend Hannah, with whom Will is now back in a place of friendship? Following the clean slate they agreed to give each other in last season’s finale, the pair will continue “to try to not let the past influence and inform the future or the present,” Gehlfuss shares. “And by doing so, I think that creates a little bit of space between them. Certainly, Hannah is having her own whole world explored outside of Will, which I think is really interesting. It’s wonderful to have her back, first and foremost, Hannah and Jessy [Schram].”

“Undoubtedly, the history that they have will rise to the surface again,” Gehlfuss adds. “But they’re starting over and taking it slow. And I think it’s good for them. I think that’s healthy for them.”

In the Season 8 premiere, Will became (overly?) emotionally invested when Hannah fell ill, proving that won’t be quite as easy for the exes and colleagues to start fresh as they had hoped. “We’re saying clean slate, and then Will definitely is guilt ridden from all the events that have happened, and he’s there to be by Hannah’s side, and people are questioning the relationship at that point,” says Schram, who plays Hannah. “But ultimately, I think that that’s just because they have such a strong bond, and we’ll see how that unfolds going forward, whether that just be [a] strong bond that continues in respect and a rooted love or if it flourishes into more.” 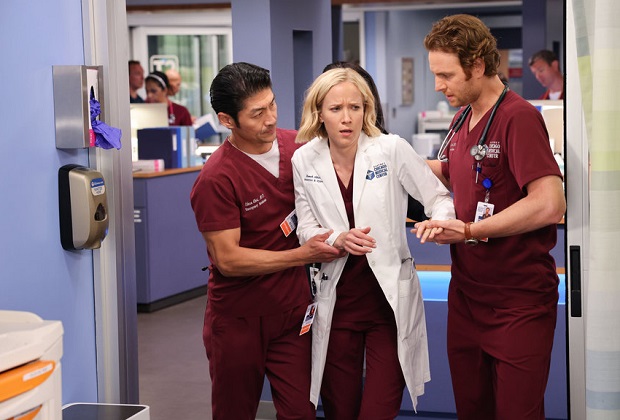 As for Hannah’s health crisis, which was spurred on by her history as a drug addict, the doctor feels like she’s in a different, healthier place in her life now, but “she just can’t get beyond the choices and trouble that she had in the past,” Schram describes. “I think that we’re still going to see her struggle with the stigma. She will constantly have to prove herself, not just because of her addiction, but because she’s a woman within the business, and that’s something that we’ve got to take on, as well.”

“But that being said, I think that Hannah is in a very healthy space moving forward,” Schram continues, “and we get to see who she is as Hannah past the addiction and who she might have been beforehand, as well.”

Press PLAY above to hear more from Gehlfuss and Schram, then hit the comments with your thoughts!