When NCIS Special Agents land in the crosshairs of a hitman, it will fuel CBS’ first-ever three-way crossover between NCIS, NCIS: Los Angeles and NCIS: Hawai’i.

Every Crossover Between JAG, NCIS, MacGyver and Other Shows 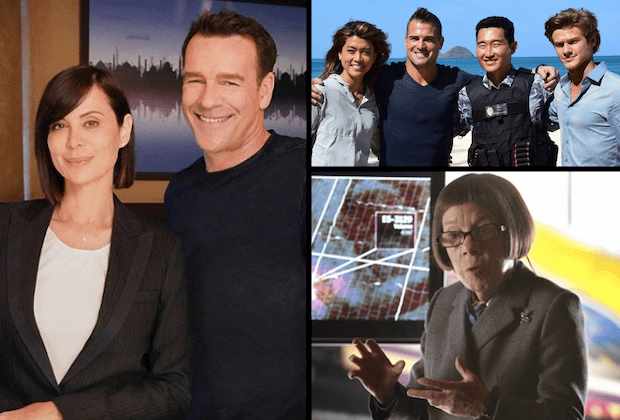 NCIS and NCIS: Hawai’i have crossed over twice thus far, including with their very recent season premieres. But NCIS: Los Angeles, which kick off its 14th season this Sunday at 10/9c, has yet to join in the fun.

“You know, that’s a challenge,” LA showrunner R. Scott Gemmill told TVLine when asked about the potential for a three-way crossover. “Three different shows during COVID, with travel…. We’ve talked about it for a long time, so hopefully it’ll happen. It’s not that we won’t keep trying, that’s for sure.”

NCIS boss Steven D. Binder echoed Gemmill in a recent TVLine Q&A, saying that even a two-way crossover “is very difficult, logistically, to pull off, because Hawaii requires a day to travel there and back, and anyone [on our cast] who goes there, we have to write them out of one or possibly two shows on our side.”

Crossing over with Los Angeles “is a little easier, since they’re ‘down the street,'” Binder allowed, “but it adds up. It’s deceptively difficult to keep the days straight and the shooting schedule straight…. I am in awe of these shows that do it regularly!”

Per EW.com, NCIS‘ three-way crossover event is penciled in to air in January 2023, and will involve “a mysterious and highly trained hitman” who has several NCIS agents in his sights.