Warning: The following contains spoilers from Thursday’s Ghosts premiere. Proceed at your own risk!

It was the cliffhanger question that haunted Ghosts fans all summer: Would Jay be able to see the Woodstone Mansion spirits after taking a fall through the floor and hitting his head?

After all, when his wife Sam took a stumble down the stairs in the show’s pilot, she awoke with that very special ability. So Jay was wondering the same thing in the Season 2 premiere when he regained consciousness and excitedly began running through the property while calling out the ghosts’ names. Alas, after a fake-out, it was revealed that Jay had not gained the ability to see his BFF Pete, No Pants & Co. 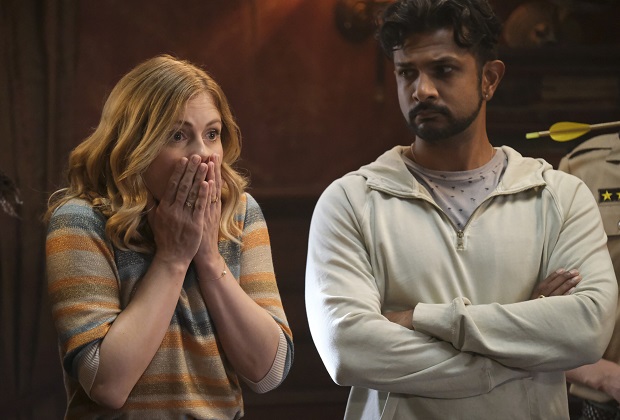 “It just felt like it was going to be too much of a premise-breaking development,” co-showrunner Joe Wiseman tells TVLine of the decision not to give Jay powers. “We’re only 18 episodes in from the first season, and it seems sort of like it’s Sam’s thing, and it’s his thing that he sort of has to deal with being this guy who’s not privy to what’s going on. We just don’t want to blow that up yet.”

Co-showrunner Joe Port also singles out the uniqueness of Sam’s ability and his desire to not take away from that. “I know we’re a TV show, but it seems like a very TV-ish direction to go, I guess,” Port explains. “I didn’t mind the head-fake in that direction, but it seems like Sam’s power is very rare. It doesn’t seem like this should be something that happens to that many people that hit their heads. So I just thought it would be too much that it would happen to two people in the same household.”

Asked if it was just too early in the lifespan of the show — it is only the second season — to enact such a big twist, Port says, “It’s partly that, as well. But I also think him having that power in that way, I don’t know that that’s a place to go. I’m not sure.”

While the writers went in a different direction with Jay’s story, the supernatural comedy “is the type of show where he could have died or he could have seen them for a little while,” Wiseman notes. “In our mind, it was a valid, fun cliffhanger, and then, ultimately, when we thought about it, we didn’t want to go there yet.”

Does that “yet” mean there’s a possibility of Jay being able to see ghosts in the future? “I mean, nothing is ruled out,” Wiseman says.

Ghosts fans, what did you think of the season opener? Grade it below, then hit the comments! And for more scoop on what’s going on with Jay in Season 2, check out our preview here.