The following contains massive spoilers from The Rookie‘s Season 5 premiere.

This Sunday night in The Rookie‘s Season 5 premiere, what happened in Vegas between “Dim” and “Juicy” did not stay in Vegas for Tim and Lucy.

Prior to resuming their undercover dynamic as a thug and his moll, Sergeant Bradford (played by Eric Winter) and Officer Chen (Melissa O’Neil) each were nudged by confidantes (Lopez, Tamara) to answer for any real feelings brewing beneath the surface.

Later, en route to Vegas in a drug dealer’s PJ, they shared another passionate, prolonged, “fake” kiss to help sell Dim and Juicy’s Mile High Club antics. Afterward, Tim himself even gut-checked Lucy on what she might be feeling — but she shrugged off their convincing “practice” kiss as simply having the understandable effect of an intimate act.

Once that successful assignment was over and Tim walked Lucy home, she contended that they were technically still “undercover” as lovebirds, and she invited Tim inside. After much thought, he took the bait.

Taking “Chenford” this far in the Season 5 premiere “felt like the organic place to go,” showrunner Alexi Hawley tells TVLine. “The reality of it is when he was her direct supervisor, there was no way [to go there]. Even now, we’re in a place where there is a discrepancy in terms of rank, so that still is an issue, but it did feel like we were building to this place where it felt organic to push it.”

The Season 4 finale’s doppelgänger twist, which paved the way for Tim and Lucy to pose as a criminal couple, “allowed us to let some things that the audience completely saw under the surface come up,” Hawley noted, “and now we’re at a place where we can’t ignore it. So this season, we definitely have to lean in to whatever it’s going to be, the next stage of this.”

But what will any “next stage” look like now that Tim and Lucy’s coupling was interrupted by the shocking discovery of the latter’s beau, ADA Chris Sanford (Kanoa Goo), splayed across her couch with his wrists slit — the grisly handiwork of escaped serial killer Rosalind Dyer?

“Rosalind was mad at Lucy for not showing up in court and not playing her game…,” Hawley says of Dyer’s agenda. “That was her way of getting back at Lucy. And it also was a pretty brutal obstacle to throw in Chenford’s way.”

Whatever Chris’ fate turns out to be, “there’s going to be a great sense of guilt” for Lucy, who takes the blame for him being targeted. “Rosalind only chose Chris because of Lucy, so that’s definitely going to have an impact,” says Hawley.

Will a shaken Lucy compartmentalize what was about to transpire between her and Tim, as she processes what happened to Chris? “It’ll definitely have an impact on her point of view on what she was about to do with Tim,” Hawley previews. “That is something she’ll have to navigate — that shocking reality, or splash of cold water” on an intimate moment. 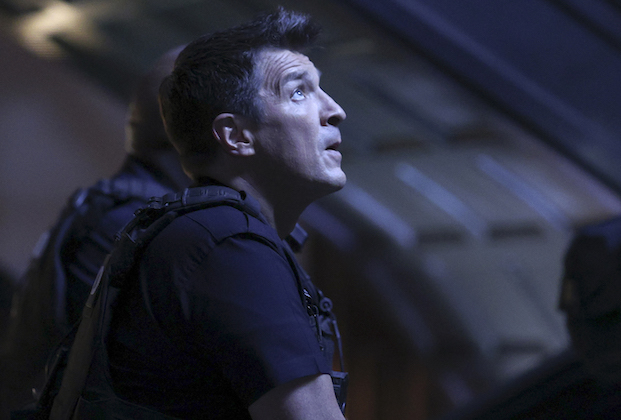 Elsewhere in the Season 5 premiere: Officer John Nolan (Nathan Fillion) was granted a “golden ticket” for his crafty heroics in the Season 4 finale — inviting him to choose any next LAPD post he wanted.

Affirming that golden tickets in such a scenario are real things, Hawley notes, “You can’t say, ‘I want to be commissioner,’ but any division, any job you want, they will train you for — which is why I love the gag of everyone chiming in on what he should do,” K-9 unit/getting to keep the dog included!

What kind of TO will Nolan be, once his new gig kicks in with Episode 3 (and following a modest time jump)? Will he take any cues from Tim, Nyla, Angela or Talia when breaking in his first boot?

“I do think that Nolan at heart is an empathetic person — he’s a listener, he’s a question-asker — so I don’t think anybody would believe him as a hard-ass like Tim,” says Hawley. “But there is this line of being too nice or too willing to give the benefit of a doubt on a job when s–t can come out of nowhere and turn everything upside-down.

“We’re going to throw a lot at him,” Hawley shares, which will raise the question: “How do you train somebody when chaos is happening?”