Our Thursday-night tradition is coming to an end, Big Brother fans: With the Season 24 finale just days away (Sunday, 8/7c), Thursday’s hour of the CBS series served as the last regular live eviction episode until next summer.

But with only four people left in the house, and only one vote getting cast, there wasn’t actually much eviction business to attend to on Thursday; here’s how the hour was ultimately filled:

* First, as quickly as Monte and Taylor’s showmance began, it ends — for the pettiest of reasons, to be frank. During a hangout in the HOH bedroom, Monte initially bristles at Taylor when she makes a flippant comment about his goddaughter, noting that Monte hasn’t actually watched her grow up for the past year because he’s been in the Big Brother house for the past three months.

Then, when all four houseguests are in Taylor’s room later, Monte falls asleep with Taylor’s headphones on his ears; in an effort to show Brittany (and perhaps Turner) that she isn’t getting too cozy with Monte and sharing all of her belongings with him, Taylor takes the headphones off his ears, accidentally bumping his glasses and waking him up in the process. Now Monte’s even more annoyed, and he leaves the room.

After a conversation between Monte and Turner about the Taylor situation (where Monte essentially reduces his recent romance with her to a physical attraction that he eventually acted on), Monte visits the HOH bathroom where Taylor is in the tub, seeking an apology for her goddaughter comment and the headphones grab. Taylor is immediately remorseful for both things, but Monte appears unsatisfied with that, choosing instead to lecture her about her personality. “This is not a person I want to spend more time with, because I have a very low tolerance for disrespect,” Monte tells her. “It’s such a turn-off sometimes.” He even repeats hurtful comments that Daniel made about her back at the start of the season, when he remarked that Taylor “rubs some people the wrong way.” I think she gets it, my dude. You can wrap it up! 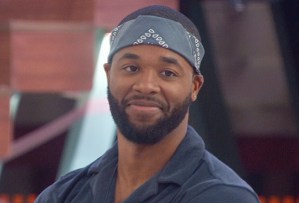 Monte and Taylor agree to get some space from each other, and after he leaves, Taylor remarks, “We’re back to the ‘Taylor is an insensitive bitch’ narrative.” In the Diary Room, meanwhile, she remarks how insulting it was that Monte would invoke Daniel’s language about her from earlier this season, adding that she may need to let “cold Taylor” out in order to win that grand prize.

* We catch up with things at the jury house, where Terrance, Michael and Alyssa all join the group to varying levels of surprise. And in this week’s edition of Protect Joseph At All Costs, the poor guy is clearly crushed to learn from Alyssa that Monte and Taylor had been spending quality time together the previous week. The look on his face! The mopey “I guess that’s their business or whatever” talking head! Will he ever know peace in that jury house?

* Feeling reinvigorated after video messages from home, Brittany makes a final plea to Monte, reminding him that he and Turner are evenly matched at the moment, and Monte could very well lose to Turner if they’re sitting in those final chairs together. Brittany, meanwhile, is aware she doesn’t excel at physical competitions, which would give Monte even more of an advantage in the final Head of Household challenges.

Unfortunately, despite that well-crafted pitch (and another convincing argument in her pre-eviction speech), Brittany is indeed evicted at Monte’s hand. She tells Julie that Turner is better for Monte’s game at this point — is he? How, when all of the remaining gameplay is about winning competitions? — and remarks that she’d like to have a “beautiful friendship” with Michael after the game, provided she can get some clarity about what went down during the double eviction.

* With 20 minutes left to fill, Julie has a conversation with last season’s Cookout alliance about this summer’s gameplay. The highlights: 1) Hannah doesn’t think The Cookout’s sense of alliance unity can ever be replicated in future seasons; 2) Tiffany comments on the Kyle situation from a few weeks ago, calling out Terrance for wanting to keep Kyle in the house despite his racist remarks; and 3) Derek, Kyland and Xavier, at least, currently see the game as Taylor’s to lose. (But if you want Tiffany, Hannah and Azah’s opinions on that topic, you’ll have to find them on… Julie’s Instagram!)

With that, I turn it over to you. Do you agree with Monte’s choice to evict Brittany? Tell us below!