Hulu’s Reboot, which released its first three episodes on Tuesday, goes full meta as it pokes fun at the television’s industry’s resolve to reboot beloved shows of yesteryear.

In Episode 1, edgy writer Hannah (played by Crazy Ex-Girlfriend’s Rachel Bloom) gets the greenlight from Hulu to revive the fictional early-aughts sitcom Step Right Up, about a blended family caught in wacky scenarios each week.

But when Hannah finds out via Hulu executive Elaine (Last Man Standing‘s Krista Marie Yu) that the network has brought in series creator Gordon (Mad About You‘s Paul Reiser) to oversee the reboot, she quits. Sterling also threatens to walk on behalf of his castmates — and they’re not happy. They really need this show to work. Bree is broke and getting a divorce after her husband cheated on her, Clay’s life remains a mess, Zack was fired from his last teen movie for being too old, and Sterling’s last paying gig was over a year ago… voicing a hemorrhoid.

The cast rallies to get Hannah back on board, and that’s when we learn why she doesn’t want to work with Gordon. She’s his daughter, and Step Right Up was about Gordon’s new stepfamily, which was especially messed up since he basically ignored Hannah’s existence. The reboot’s big twist — that Sterling’s character Reed has a secret child — is essentially Hannah telling her own version of the story.

In Episode 2, Gordon and Hannah clash over Gordon’s decision to bring in reality show star Timberly Fox (The Sex Lives of College Girls‘ Alyah Chanelle Scott), who is terrible at acting, to play Reed’s daughter Whitney. Timberly starts to improve when Sterling begins coaching her, but Bree attempts to sabotage her with a string of awful acting tips. Bree only comes clean to Timberly after Sterling points out that she’s doing exactly the same horrible things to her younger costar that had been done to her earlier in her career. 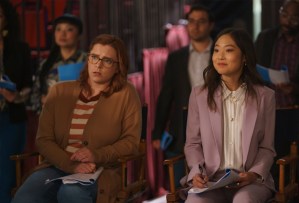 Episode 3, meanwhile, centers on Hannah and her young, diverse writers butting heads with Gordon, who wants to stick with his “old-timey jokes” rather than listen to the new voices in the room. Gordon also brings in older, more experienced writers in a debate over old vs new. Eventually, they all learn to work together.

Meanwhile, Clay begins hooking up with Zack’s mother Susan (Reno 911’s Kerri Kenney-Silver), while Sterling insists he that he doesn’t have feelings for Bree despite becoming aroused while rehearsing a love scene. He argues that he was so committed to the moment that he felt what his character was feeling. In the humiliating aftermath, the network recommends Sterling wear a giant panty called a vajoga or a small, flesh-colored sack known as a modesty sock.

What did you think of Reboot‘s premiere? Grade the first three episodes below, then let us know your thoughts in the comments.