The following contains spoilers from the Season 5 premiere of CBS’ FBI.

CBS’ FBI opened its fifth season with an hour that was quite explosive, though — thankfully, but barely — not in a way that took any agent’s life.

The episode “Hero’s Journey” opened with OA (played by Zeeko Zaki) working undercover as the prospective buyer of a not-insignificant bomb. But when he went to close the deal/finish the sting, the seller’s partner was found dead, the explosive missing.

Thanks to some early leads, traffic cams and facial recognition, the would-be bomber was identified as Nathan Baker from Portland, Oregon, who has been in and out of psychiatric institutions and who is currently wanted for torching the home of a member of the Republican National Committee.

It was determined that the anti-Right Wing wingnut was going to target a conference hosted by The Federalist Society. Jubal’s team raced to evacuate the building, while OA and Wallace (Katherine Renee Turner) watched a bomb squad tech carefully defuse the bomb. Alas, with the seconds ticking down, it was realized that the bomb was designed to only appear to be neutralized. The bomb squad tech declared that the device could not be stopped in time from detonating, and that to try to move it might set off any possible motion-detecting switch.

But OA, after sending Wallace and the bomb squad tech away, breathed deeply, grasped the handles of the duffel holding the bomb, and lifted it… without triggering anything. he then sprinted upstairs and outside, put the bomb into one of the FBI’s rides, hopped in and gunned the gas, and then leaped out the door as the vehicle sped down the driveway, away from the building and evacuees.

An instant later, with OA sprinting in the opposite direction, the bomb exploded in spectacular, but non-lethal, fashion. 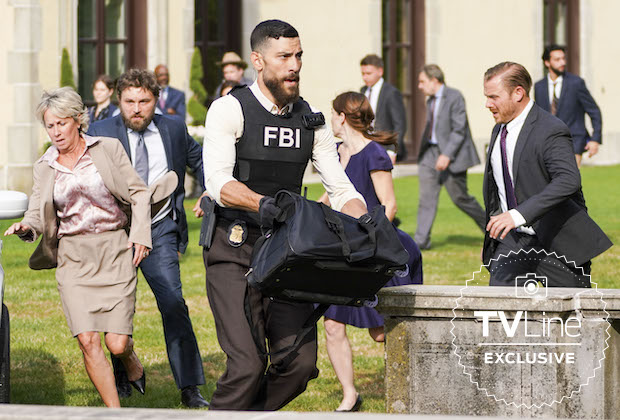 Reflecting on OA’s death-defying decision to move the bomb and risk triggering it — which would have ended his life, among others’ — portrayer Zeeko Zaki tells TVLine, “I think that in those moments, it just comes down to virtue and doing what is right in that moment. I think that when lives are on the line, OA’s judgement is very clear — and it’s a high-stakes, fun place to live in for a bit. So, I think he moves that bomb because when he signed up for the FBI, he knew he’d have to.”

Elsewhere in the premiere, Jubal (Jeremy Sisto) failed in his juggling of the mad bomber scenario with his son Tyler’s sparsely attended birthday party and his own assignment to pick up the cake. (Overworked dads everywhere commiserate!) Zaki told TVLine that despite Jubal’s best efforts to compartmentalize, the team will come to suspect he’s dealing with drama on the home front.

“I think it’s really, really nice to have Jubal’s character be a father figure to the agents and then also to get to play that storyline, outside of work with a family with his kid,” said Zaki. “It shows all the different realities of the FBI. We have agents that don’t have families who can go hide underwater for 10 days to solve a crime, and then we have the ones that do [have a family]. It’s all part of it.”

What did you think of FBI‘s season premiere?