Thony De La Rosa eliminated one big problem from her life during The Cleaning Lady‘s Season 2 premiere… then promptly added about half a dozen more.

During Monday’s sophomore debut, Thony spent the hour in pursuit of husband Marco, who had kidnapped the pair’s son, Luca, and planned to take the boy out of the country. But when Thony finally met up with Marco at a nearby motel to discuss the situation — with her sister-in-law Fiona and nephew Chris in tow — the conversation got heated within minutes, and Chris accidentally killed Marco when he shoved the man, sending him tumbling down the motel staircase.

Thony tried her best to do damage control after Marco’s death, even lying to the motel manager that she was a stranger who had simply found Marco’s body on the stairs. The manager seemed highly suspicious of Thony from the start, though — and in the episode’s closing moments, we learned that the motel’s security cameras had a clear shot on Chris pushing Marco, and that building manager knows exactly how Thony was involved in the incident.

According to co-showrunner Melissa Carter, she and the Fox drama’s writers “always knew that we wanted to kill Marco” at some point, “and we discussed last season all the different, fun, criminal ways he could get involved,” she tells TVLine. But the demise of Thony’s husband largely stemmed from Carter and co-showrunner Miranda Kwok’s desire to “explode into the second season” and “change all the trajectories of all these characters,” Carter elaborates. 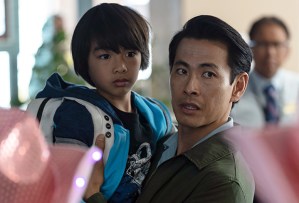 “In a white family, if an altercation like this had happened and someone dies and it’s a mistake, you’d explain it and you’d be believed,” she continues. “But because they’re undocumented, because they’re so afraid of the law, because of the danger that they wouldn’t be believed — and even if they were to be believed, they could be deported — it tilts everything on its axis.”

“Luca is better now, and we wanted to shift the focus from what a mother would do for a child to what Thony and Fiona will do to protect their families,” Kwok adds. “This will push them to make more complicated choices and push them further across the moral line.”

It will be an emotionally trying season for Chris in particular, though: He’s nowhere near as comfortable maintaining a lie as his mother and aunt seem to be, which Kwok says will prompt a “mental crisis” for the teenager.

“They all have this secret to keep now, but they aren’t able to help him deal with the fact that he accidentally killed his uncle, and how that’s going to affect him,” she teases. “He doesn’t want to lie about it, but yet it endangers the entire family if he were to speak out. And Thony covered it up! So now it’s not just one thing. It becomes a snowball effect.”

As for the motel manager who already knows the family’s big secret, Carter confirms he will “definitely” remain a thorn in Thony’s side throughout Season 2, but she’s much more criminally savvy than the man might expect.

“The arc for Thony is that she’s learned a lot of criminal things along the way in Season 1,” Carter says. “She’s learned how to cover up a crime scene, and Season 2 is really about how she moves into her own criminal element after everything she’s learned from Arman.”

Cleaning Lady fans, did Marco’s death take you by surprise? Grade the Season 2 premiere in our poll below, then drop a comment with your full reactions!