NCIS opened Season 20 on Monday night with Parker and his secretive ex still in hiding, while McGee & Co. worked to ID “The Raven,” believing the adversary to have a vendetta against their team.

The NCIS team in fact had two foes to tussle with, seeing as FBI honcho Sweeny is himself on the hunt — for Parker, who is wanted for the murder of his former partner. After the team baited Sweeny with a false tip on Parker’s whereabouts, Vance got word to Parker to “hurry” with his and Vivian’s investigation into the source of the offshore account that helped frame Alden.

Laying low in a motel, Vivian worked her laptop to chase down the offshore account, but came up empty. When she then got a secretive text from someone (to “stop stalling” and turn in Parker the next morning at a nearby diner), Parker eavesdropped from the bathroom as his ex responded to the message. Afterwards, Parker quietly reached out to Kasie to run a trace on Vivian’s burner phone, while the rest of the team switched gears to puzzle over not who The Raven is, but, “Who would be targeting Parker?”

It turns out that multiple convicts whom Parker put away have filed appeals, now that their arresting agent appears to be dirty himself. McGee and Knight head to prison to suss out a hacker named Maxwell, who denies harboring any ill will toward Parker but who also has a reaction to the name “The Raven.” Maxwell says The Raven (or Voron, in Russian) is an oligarch who loves to create chaos/mass panic, to the point that Maxwell loathed working for him.

Parker meanwhile accuses Vivian of conspiring against him, when she seemingly brings him to a certain diner to get hauled in by Sweeny; instead, it’s Fornell shows up, summoned by Vivian to help out their case. Irked by her ex’s lack of trust, Vivian explains that she had been getting messages from Sweeny, but she held him off. Fornell then leads them to a lady friend of his (hey, L.A. Law‘s Susan Ruttan!) who is able to determine that the offshore account was created by someone in Moscow.

Parker, posing as a shrink, meets up with McGee to chat up the imprisoned Maxwell himself. Afterward, they decide to use Maxwell as “live bait” for The Raven, very conspicuously coordinating with the rest of the team (NCIS: Hawaii visitors included) to relocate the hacker to a safe house. Sweeny intercepts their caravan first, though, determined to bring in Parker, but then the actual baddies show up in unmarked fans and toting heavy guns. A shootout in the street ensues, during which NCIS takes down several goons, but Maxwell is nonetheless grabbed and whisked away — but not before Parker sees the hacker smile at him, revealing that he was in on his own abduction.

Afterward, Parker deduces that Maxwell himself is The Raven, and has spent the past several year coordinating his “escape.” His next stop apparently is (conveniently!) Hawaii, so Parker — with Vivian hospitalized by a gunshot wound — dispatches Torres and Knight to the Aloha State to continue the hunt, in Part 2/the Hawaii half of the season-opening crossover event…. 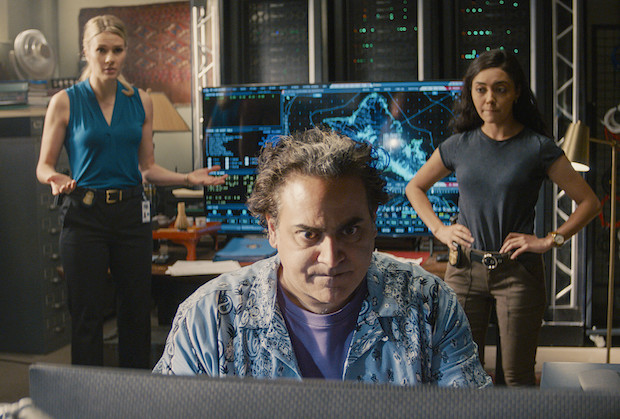 Update: On NCIS: Hawai’i, clues from Maxwell’s prison cell and dossier, combined with fresh thinking by Ernie, led the team to their target, who was founding holding a dead man’s switch that would detonate an explosion of nerve gas outside the well-attended RIMPAC public gathering. It turned out that “Maxwell” (real name: Jason Hearns) was out to kill the enlisted son of the professor who booted him from a PsyOps program years ago, because he was, well, crazy. Luckily, Kai, Jesse, Knight and Boom-Boom’s colleague Bam-Bam were able to locate, seize and defuse the bomb, allowing Jane and Torres to gain the upper hand and take down Hearns.