It was only a matter of time before an insider trading storyline hit Industry‘s Pierpoint & Co.

In the Season 2 finale of HBO’s anxiety-ridden financial drama, the pressure to keep bigwig Jesse Bloom’s business finally led Harper to cross a very illegal line. While she scrambled to maneuver around Bloom’s own wheeling-and-dealing, some key conversations with Celeste and her father shook Yasmin’s world to the core. Oh, and as the season wound down, there were a few firings, one of which was an absolute jaw-dropper. Read on for a full recap of “Jerusalem.”

When the finale kicks off, Harper, Eric, Rishi and Danny are in a pitch meeting, but when the company says its looking to relocate back to New York, Harper refuses to go back. (To be fair, Eric doesn’t seem too crazy about it either). Guess it’s back to the drawing board for this sneaky little opportunistic team.

Yasmin tells Celeste that she doesn’t think they should represent men like her father. Her boss admits that three of her guys were in the seized black book obtained from Jeffrey Epstein, so clearly her ethical compass is a bit wonky. She more or less tells Yas to quit thinking she can change things. If she wants to be successful, she’s gotta operate within the system, as it is. Celeste also says Yasmin’s father made a pass at her some time in the past, and when Yasmin later confronts her pops about it, he continues being the utter slimeball that he is.

Harper grills Gus about what he knows about the NHS contacts. Jesse is betting against FastAid. He’s short, and she needs to give him whatever edge she can. Gus doesn’t say much, but his silence speaks volumes. She deduces that Gus’ boss is killing Amazon’s inroads with FastAid. But she wonders: Does Aurore have a stake in Rican? How is Amazon being allowed to buy FastAid without a whimper? Gus gets frustrated and peaces out of the convo. 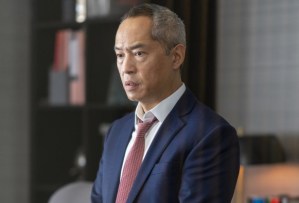 Harper apologizes to Jesse for the short, telling him he should finally tap out. She asks — hypothetically, of course — what would happen if the government stopped any anti-competition inquiry into Amazon’s takeover of FastAid. So hypothetically, her advice is for him to tap out. Jesse knows Harper gleaned info from Gus (as he knows Gus works for Aurore Adekunle), but he doesn’t seem angry. He gives her a long hug, notes she isn’t wearing a wire and asks her to leave.

Harper tells Eric she thinks Bloom is out, which takes the wind out of their sails. While Jesse is on TV speaking on CNN, he texts Harper (live on the air!): “Find any remaining Rican shares on the open market and buy them NOW.” She runs to her desk and tells Rishi to make it happen. Jesse then says that he’s glad that England still takes anti-competition rules seriously, and that officials will weed out government corruption and cronyism. Bloom is now making money on both sides of the trade, killing FastAid’s acquisition and making Rican the likely home for the NHS contracts. “It’s almost as if he planned it,” a suspicious Danny says.

And that’s when Harper knows she is screwed. She explains to Eric that she told him the anti-competition inquiry was off the books. Since that knowledge was confidential and privileged, that’s insider trading. “I think you led him to water and he drank,” he says. Eric asks her to look him in the eye and tell him she didn’t now. She does so, but was she convincing enough? (It is Harper, after all, so who knows?)

Meanwhile, Aurore knows exactly where the leak came from, and it seems to have been her plan all along. But while she’s looking at a possible promotion, poor Gus is out. He calls the move callous, but she looks at it as pragmatic. He arrives to the conclusion that perhaps politics isn’t for him after all. 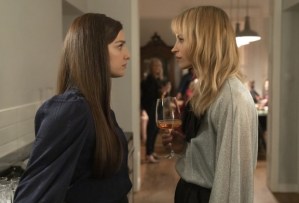 Eric pitches a new super-team to Bill Adler, calling it MHFS — Macro Hedge Fund Sales. Eric and Harper then sell Rishi and Danny out, saying they were THIS CLOSE to heading to a Japanese competitor. “Punish them. Cut them,” Harper says, as she sells her own “loyalty” by backstabbing her friends. Eric and Harper also bring up the sexual assaults being committed by Nicole, using all that drama as leverage. “You two are quite something,” Adler says. That they are.

When Yas tells Celeste they won’t be working with her dad anymore, her boss isn’t having it. “Without your father, your seat costs me money. He’s your value to me,” Celeste says. Seems like Yas is at a crossroads: She never bothered to start her own bank account, so all of her money has been funneling into her dad’s accounts. She might be out of a job, the locks on her doors are changed and he’s frozen her out of the account. She goes to see Robert and asks the recovering addict to find her some coke, which he does. But when he gets pulled over, the little baggy of powder falls to the ground right in front of a cop, who then threatens that it’s enough for Robert to lose his job over. Though he was sprung from the drunk tank by Nicole, whether his arrest will affect his job is left hanging.

Adler ultimately takes Eric and Harper up on their offer. They can stay at Pierpoint, but Rishi and Danny will be tossed out. But not before Harper and Rishi get hot and heavy in a bathroom stall… the night before the guy’s wedding day!

As Harper walks into the office one morning, she sees Danny struggling to get into the building. His access card is repeatedly denied. But Rishi, however, is still there because Eric found the headcount. As she follows him up to his office, she’s surprised to find a man from HR there. “This cannot be about Jesse, I didn’t know…” she whispers. The man asks her to take a seat, and tells her the firm found out that her transcript was forged. “There’s only one course of action in this scenario,” he says. She turns to Eric with wide eyes, just as he states that he has to let her go. “You’re fired, Harper.”

Surprised Harper’s past caught up with her? Did she deserve to get canned? Vote in our polls, then fire away in the comments.