For perhaps the first time in Big Brother‘s 24th season, the question of who would be evicted at week’s end has been a bit of a head-scratcher for those of us at home.

For those inside the house all season long, the identity of the evicted player has been an ever-shifting mystery week after week, from the stunning non-eviction of Week 1 to Michael’s emotional ouster last week. But whether you watch the BB live feeds or simply keep up with the primetime broadcasts, it’s rare that viewers at home can’t get a read on who’s truly going to walk out that door — which made Thursday’s match-up between Taylor and Alyssa more intriguing than most.

Let’s recap what went down during Thursday’s hour:

* Folks, an 11th-hour showmance has emerged, and it’s a little surprising! Even though Taylor previously expressed an interest in Joseph (and vice versa), and Taylor is currently sitting on the block at Monte’s hand, Monte and Taylor find themselves flirting more than usual as the number of houseguests dwindles, and a series of late-night hangouts in the HOH bedroom leads to the pair eventually cuddling and kissing. Oh, how I hope Joseph is forever shielded from this footage. Someone protect that man.

The morning after Taylor and Monte have kissed for the first time, Alyssa finds them in bed together but doesn’t seem to realize anything romantic has happened. Brittany, meanwhile, might not automatically assume they’re a showmance, but she does grow frustrated that Taylor is spending so much time with Monte when Brittany has been fighting so hard to protect Taylor’s game all week. In fact, Brittany generally seems to have become the odd woman out in the house, as she tearfully realizes how often Monte, Taylor, Alyssa and Turner are all hanging out together, delighting in each other’s company. 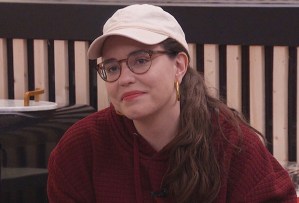 * As we’ve seen before, Brittany tends to gossip when her feelings are hurt, and this week has been no different. In the bathroom one morning — after she’s overheard the other houseguests praising Michael’s gameplay and his dramatic eviction, which she finds crushing — she hints to Alyssa that she wouldn’t be able to save her this week even if she wanted to, which prompts Alyssa to suspect that she might not have Turner’s vote locked up, after all.

* Alyssa goes to Turner and asks him for honesty about who he’s supporting this week — but when she tells Turner that he’d lose both her jury vote and her friendship (!) if he voted to evict her, he’s peeved by the threat and now wants to vote her out more. In the end, with Brittany feeling betrayed by Taylor and Turner feeling irked by Alyssa, the votes fall as you might expect: It’s a tie — Brittany evicts Taylor, Turner evicts Alyssa — and Monte breaks it by evicting Alyssa.

In her post-game chat, Alyssa is highly suspicious that Turner’s vote was the one against her, and she gets emotional when both Taylor and Turner’s goodbye messages confirm that hunch. But to Alyssa’s credit, she concedes that her threats to withhold a jury vote from Turner were “mostly strategy,” and she assumes that with some reflection time in the jury house, she’ll appreciate his game move and take it less personally.

* With that, it’s time for the Head of Household competition — the first HOH comp to be completed in full on the live eviction broadcast in quite some time. Turner, Brittany and Taylor must watch a video montage of Julie Chen Moonves (awkwardly!) dancing and changing her outfit about a dozen times, then must answer true-or-false questions about the finer details of the footage they just saw. Turner, for his part, seems completely baffled by every single question Julie asks, and it’s pure luck that he gets any of ’em right. Brittany and Taylor, meanwhile, are evenly matched for most of the game, leading to a tiebreaker round where they must estimate how many seconds this week’s Power of Veto competition lasted, from start to finish.

Taylor’s guess of 480 seconds is certainly way low, but it pays off: The answer is a little over 1,000 seconds, and after Brittany way overshoots with a guess of 2,700 seconds, Taylor is the new Head of Household! She did just assure Alyssa in her goodbye message that she’d fight to get two women into those chairs on finale night… but now that Brittany tried to evict Taylor just moments ago, might Taylor’s loyalty change this week?

Your turn! How do you feel about Alyssa’s eviction? And what do you make of this season’s Final Four? Drop a comment below!