There is a lot to process in the first trailer for Werewolf by Night, a Marvel Studios Hammer Horror-style “special presentation” set for a Friday, Oct. 7 release on Disney+.

Directed by Michael Giacchino, Werewolf by Night‘s cast is led by Gael García Bernal (Mozart in the Jungle), as Jack Russell and his titular alter ego, and Laura Donnelly (The Nevers) as whom many assume to be monster hunter Elsa Bloodstone. 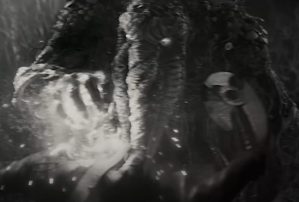 In Marvel comics lore, Jack Russell on his 18th birthday learned of his family’s lycanthropy curse, which dates back to 1795 and every full moon transforms Jack into a powerful man-wolf hybrid possessing enhanced strength, speed, stamina, agility and reflexes.

The Werewolf’s allies over the years have included the aforementioned Man-Thing, living vampire Dr. Michael Morbius, Johnny Blaze AKA Ghost Rider, Dr. Stephen Strange AKA Doctor Strange, Tony Stark AKA Iron Man and Jessica Drew AKA Spider-Woman, while mercenary Marc Spector AKA Moon Knight, Morgan le Fay and Eric Brooks AKA Blade have been among his adversaries. 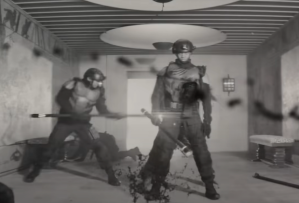 Other familiar Marvel elements sprinkled throughout Werewolf by Night lore have included the Darkhold, Frank Castle AKA Punisher and Flash Thompson AKA Agent Venom.

Want scoop on Werewolf by Night, or for any Marvel TV show? Email InsideLine@tvline.com and your question may be answered via Matt’s Inside Line.</strong