Trailblazer. Icon. Turtle. These are just a few of the words one could use to describe Venus de Milo, a character largely forgotten by pop culture despite being entirely unforgettable.

On Sept. 12, 1997, Fox Kids debuted Ninja Turtles: The Next Mutation, the first (and still only) live-action series based on the popular franchise. It was a massive undertaking, former President of Motion Pictures and Television for Saban Lance H. Robbins recalls to TVLine, including “the biggest sets we’d ever done for a show, including Power Rangers, to make that long tunnel in underground New York.”

But it isn’t the elaborate sets or reimagined Turtle Van that first spring to mind when most people think about The Next Mutation. That honor goes to Venus, TV’s first (and still only) female Ninja Turtle. Unlike her male counterparts — Leonardo, Raphael, Donatello and Michelangelo, all of whom were named after noteworthy Renaissance artists — Venus got her name from the famously arm-less Greek statue depicting the goddess Aphrodite.

“Naming her after a statue famous for her figure… I don’t know if we could have created that kind of character today on a boy’s show,” Robbins admits.

And Venus indeed had a figure. In an effort to distinguish her from the other turtles, Venus was given a more slender frame, along with — to quote the Duchess herself, Stacy Ferguson — some lady lumps. Her turquoise mask also included a long braid, unlike the male turtles’ masks, which simply tied in the back.

“We had the discussion of whether she should be in pink, but we decided we weren’t going to do that just because she was a girl,” Robbins says. “I think she looked great. Believe me, we had a ton of conversations before we moved forward. … Everything had to be approved by [original Ninja Turtles creators Kevin Eastman and Peter Laird], and we made sure they were happy with it.” Fox Kids also did plenty of focus groups, “and we would not have gone ahead with Venus if we did not have some very good feedback from girls.”

Unlike the male turtles, who have always inexplicably talked like west coast surfers despite being born and raised in New York City, Venus brought a more even-keeled tone to the conversation. “She was very serious,” Robbins says. “She was raised as a shinobi, a very mystical person. She got sayings mixed up, like ‘piece of cake’ and ‘easy as pie.’ We thought it was a good offset for her humor with the other turtles’ surfer lingo.”

Adding a female turtle into the mix was “a deliberate move by Saban,” Robbins explains. “Sweet Valley High was doing well, and we were also doing a live-action series on a boat, [Breaker High, whose cast included a young Ryan Gosling.] We were always making an effort to put girls into the mix, not just because we thought it would be interesting and could add a new audience for Ninja Turtles besides boys 6-11, but also because we wanted to test the market for toys for girls. We wanted to create an action figure for girls they could be proud of. She was sort of like a superhero.”

“Everything about Saban was toy-driven,” Robbins says. “There were many shows where, if the toys did not sell a certain amount and weren’t making money, Saban would cancel them. They would just pull the show. The ratings for Turtles were huge. We were always No. 1 in our timeslot and always at the top of the ratings. Maybe they just didn’t sell as [many toys] as they had planned. Saban never had any problem saying, ‘We don’t care about ratings, only if they drive toy sales.’ So that’s probably why we had to leave it after one season. But we were getting 26 episodes a season in those days. Now you get anywhere between six and 13. So we got a good 26 episodes out of that.”

When The Next Mutation ended its run in 1998, so too did Venus’ career as a Ninja Turtle. Three animated series, two live-action films and one CGI movie have since been released, none of which even alluded to the forgotten female character. Kevin Munroe, director of 2007’s TMNT, said in an interview that he was told to make “absolutely no mention” of Venus, a character that Laird apparently “hates with a passion.” 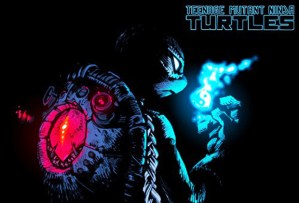 So imagine the fandom’s surprise when the controversial character returned earlier this year via the pages of IDW’s popular Ninja Turtles comic books. Penned by Sophie Campbell, who had “been trying to make a Venus comeback happen for a while,” Teenage Mutant Ninja Turtles #127 reintroduced Venus to the world as part of a four-issue arc. (The comics previously included a female character named Jennika, who mutated into a turtle after getting emergency blood transfusion from Leonardo, but Venus remains the only female turtle by birth.)

“That’s so amazing,” Robbins says of Venus’ resurgence, acknowledging that “a lot of people just don’t want to mess with success. It could be something where the timing just needed to be right.”

OK, let’s talk Venus: Do you have fond memories of the forgotten female turtle? Are you glad she’s finally getting justice, nearly quarter century after her disappearance? Drop a comment with your thoughts on the polarizing figure below.